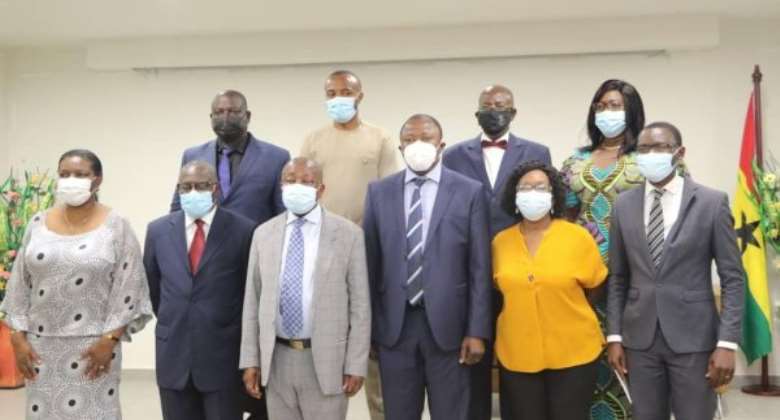 Mr Kwaku Agyeman-Manu, Minister of Health, has inaugurated an 11-Member Governing Board for the Korle-Bu Teaching Hospital in Accra, and challenged them to work hard towards securing an international accreditation for the facility.

The Minister said government was seriously looking forward to actually do things quickly to create what was called a Medical Tourism Hub in Ghana, explaining that although “we are getting close, but we are not there yet”.

Mr Agyeman-Manu thanked the members, for availing themselves to serve their country, encouraged them to work with the Management to ensure that the Hospital, which was currently the largest medical facility in Ghana, continued to effectively manage all the key referral cases brought to it.

He said government was strategically trying to open up very quickly to a lot of professionals including medical officers, Allied health workers, nurses and midwives, in order to obtain the required expertise, which would meet the demands to be generated with the completion of the Agenda 111.

He therefore urged the Management and Board to ensure that the KBTH, which had been targeted for the impending national vision, had the required capacity to maintain its position as the major health care institution of the country, and commended the facility for having already started some engagements across the west coast of Ghana.

Mr Agyeman-Manu further indicated that now with the University of Ghana Medical Centre (UGMC) also coming up fully, it was also going to be another key facility, and they had also started engaging people from outside to ensure the realization of the country's future vision.

He encouraged both facilities to work quickly towards applying for an international accreditation of which an assessment of these facilities would enable the country to begin to market what it had to the outside world.

The Health Minister therefore threw a challenge to the KBTH and the UGMC to see which of them would first acquire an international accreditation, and urged these facilities to situate themselves well in order to meet the required standards.

He also pledged the continuous commitment of the government to invest in the KBTH and to expand, remodel old facilities that had become dilapidated over the years, saying work was currently ongoing on the Maternity block among others such as the Fevers Unit, which was also virtually completed.

An Infectious Disease Centre was also yet to be complete, while funding would be sought for over the next two years to also work on the surgical block, he said.

Mr Agyeman-Manu however warned the new Board about the litigations the were likely to be confronted with in their work at the facility, but encouraged them to use effective dialogue for resolution in order to spare the Hospital the negative attraction into the public domain.