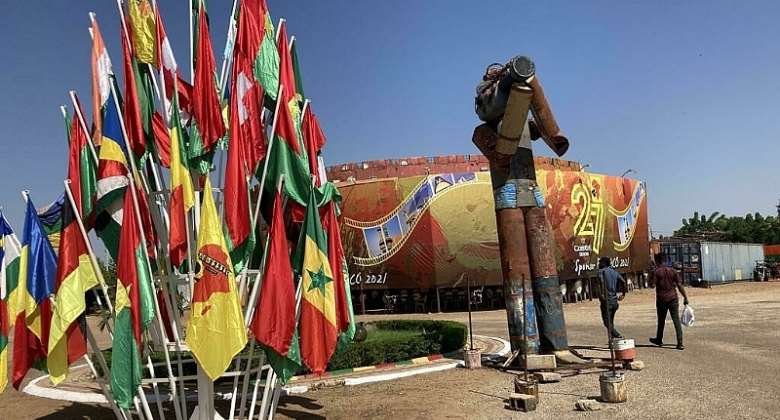 “The Gravedigger's Wife”, from Somali director Ahmad Khadar, grabbed the Golden Stallion of Yennenga on Saturday night for best picture, while home-grown Burkinabé documentary “Night Nursery” was named best documentary at the 27th edition of FESPACO.

Shouts and thunderous applause erupted after the first prize for “Night Nursery”, by Moumouni Sanou, was announced.

For Best Picture Silver Stallion (2nd place), Gessica Geneus, of Haiti, won for “Freda”, which follows the story a young woman's revenge after being forced into prostitution.

Elsewhere, the well-deserved best actor award went to Alassane Sy for his role in “Nafi's Father”, directed by Mamadou Dia, as a Senegalese imam with principles who tries to protect the town, and his family from jihadists.

As Esther, a devout and long-suffering wife, Zainab Jah won best actress for her role in “Farewell Amor” by Tanzanian director Ekwa Msangi, a touching story of immigration and separation.

The judges selected the best feature-length film from a list of seventeen offerings from 15 different African countries, including two from Egypt.

In the documentary category, 15 films went head-to-head for the prize.

Each category was awarded first, second and third place winners with a cash prize.

The theme of this year's FESPACO, which is held every two years, was “New looks, new challenges”, a telling theme give that this year's festival was pushed back eight months due to Covid-19.

The Pan-African film festival included a number of Francophone, Arabic, and English-language movies, with one in Portuguese, sometimes using local languages.

Feature films
From southern Africa, “The White Line”, a Namibian tale of forbidden love in 1963 Apartheid Namibia (then called South West Africa) gave audiences a peek at hatred and love on the same screen.

Angola's dreamy “Air Conditioner”, written and directed by Fradique, centres around a bizarre story of falling air conditioners and dreams in Luanda.

From Lesotho, Lemohang Jeremiah Mosese's original narrative in “This is not a Burial, It's a Resurrection” offers insight into progress versus tradition, which also won in the Best Cinematography category.

“Oliver Black”, a first film by Moroccan Tawfik Baba, explored themes of immigration, racism, and history in this oddball “buddy” film about a young man who meets an Algerian traveler.

The epic movie “Night of the Kings” directed by Ivorian director Philippe Lacote, features Roman, a new prisoner in the (very real) Maca prison. Forced to recite a story to the inmates, who accompany him in singing and interpretative dance, he must not finish before the sun rises. It won Best Décor.

Senegal was the country of honor at the festival, and their selection, “The Father of Nafi” didn't disappoint. Directed by Mamadou Dia, the story unfolds in a small town which becomes greedy for jihadist money, while an imam with principles tries to protect the town, and his family.

And ”Eyimofe (This is My Desire)” the Nigerian offering by twin brothers Chuko and Arie Esiri presents two separate stories of people who want to leave Lagos, if they could just get their lives together.

Based on a true story, “Nameless”, set in Rwanda's capital, Kigali, shows how those on the outskirts of society try to cope with their daily lives. It won Best Screenplay.

Dramas dominated the feature film category with a notable exception: The comedy “Les Trois Lascars”, by Burkinabé director Boubakar Diallo, had audiences rolling in their seats.

It recounts the story of three friends who go off with their mistresses for the weekend, but tell their wives that they're going to Cote d'Ivoire. The plane they were supposed to be taking crashes, killing everyone. Hilarity ensues as they try to figure out how to get out of the lie.

A number of films were previously shown at this year's Cannes Film Festival, notable among them being the “Gravedigger's Wife” by Somalian director Khader Ayderus Ahmed.

Without a hitch
Some potential festival goers may have stayed away from FESPACO due to Covid-19 and security issues, but the festival went ahead without  any major incidentc.

There was a high-visibility police presence acorss the capital, barring routes and stopping cars for regular checks as the population swelled due to FESPACO.

For the most part, though, the festival went on, with outdoor events and concerts sprinkled throughout Ouagadougou for visitors and Burkinabés to enjoy.

Hottest Photo Reports
Catch up with all the political quotes from our politicians.
Advertise here
More Somalia
ModernGhana Links
Panel Discussion on Safety of Journalists and Human Rights Defenders during the Elections concluded in Mogadishu
Veteran journalist assassinated in Mogadishu suicide attack
State media director killed; others injured by a suicide bomber in Mogadishu
Widely Condemned Eviction And Deportation Of Southerners From Self-Proclaimed Republic Of Somaliland
Federal Government Of Somalia Had Set Seven Days Ultimatum To Africanunion Envoy To Absquatulate The Country
Long-Delayed Polls For The Lower Chamber Of The Parliament Hadfinally Kicked Off
Universal Suffrage That Will Destigmatize Semi-Autonomous Region Of Puntlan
Journalists trained and poised to report on Somalia’s ongoing elections
Journalists arrested in Lasanod and Mogadishu
TOP STORIES