Two injured after warehouse collapses during rainstorm at Koforidua 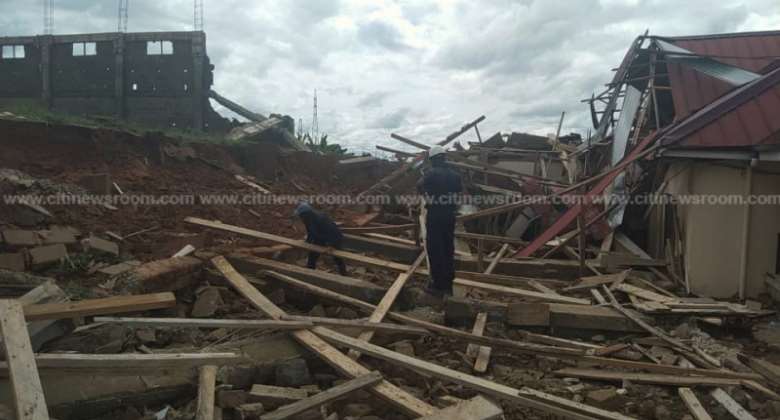 Two persons are currently in critical condition at the Eastern Regional Hospital, in Koforidua after a warehouse under construction collapsed onto their building around the Oyoko roundabout in the New Juaben North Municipality today.

The uncompleted structure came down at around 2:30 am on Saturday during a rainstorm that lasted over four hours.

Sixty-eight-year-old Jonathan Obeng, suffered injuries to his head while his son who was sleeping suffered cuts when the structure came down.

Two vehicles that were in the garage suffered some damage along with several other properties which were affected.

Prophetess Elizabeth Ockran Obeng, the wife of the victim said her husband and son were responding to treatment at the hospital.

“It was God who saved them,” she said to Citi News.

“They are now at the hospital responding to treatment. The police were here, the MCE was here, the MP was here. NADMO, the fireservice, and others came in the morning,” she added

Latest Photo Reports
Catch up with all the political quotes from our politicians.
Advertise here
More Social News
ModernGhana Links
15 pesewas reduction in fuel prices insignificant but welcoming – Commercial drivers
Drivers disappointed over 15pesewas reduction in fuel price at only GOIL stations
We'll protect our lands without resorting to violence — Youth of Wasipe
Less than 40% of refugees have registered for relocation
ECG moves district office from Somanya to Juapong
Man carrying AK-47 in Bawku-bound bus arrested at Osino
We don't know All Teachers Alliance group opposing the One Teacher, One Laptop — NAGRAT
Supply laptops to teachers for monies deducted before end of 2021 – GNAT tells GES
Immigration arrests 55 irregular migrants at Tuobodom
TOP STORIES