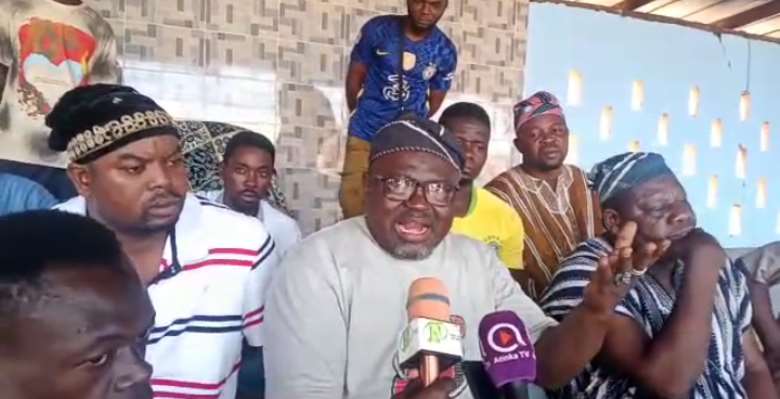 Activities to mark this year's Damba festival is underway at the various Chief palaces in the Dagbon Traditional Area of the Northern Region.

Drummers, sons and daughters within these areas were seen paying homage to the chiefs as part of the celebration.

The celebration commenced few days ago and is scheduled to end on Monday with Belkulsi at the major Palaces in Dagbon.

Dema-Naa of Tamale, Chief Adam Musah addressing Journalists at the Dakpema Palace today Saturday called on residents of Tamale and its adjoining communities to participate in the celebration in a grand style devoid of attacks.

According to him, this year's celebration is exceptional since the Dakpema Palace had made all the necessary arrangements to ensure incident-free festival.

He admonished celebrants to appear in their traditional regalia and costume to help promote Dagbon culture.

On his part, Malgu-Naa Awal entreats the youth of Tamale and Dagbon to desist from taking weapons to any of the Palaces for the celebration.

Malgu-Naa used the opportunity to advise sub-Chiefs in Tamale and other traditional areas to respect eminent Chiefs in their localities for peaceful coexistence.

He said the overlord of Dagbon and Nyeb-Dakpema wants this year's Damba festival to be peaceful and a memorable one.

"Everybody including those in the diaspora are most welcome to the Dakpema Palace for the Damba festival, as you can see the celebration has started, there is going to be alot of fun and display of culture here, so we are calling on everyone to come and join us exhibit the Dagbon culture," he stated.

He however refuted claims by some individuals in the metropolis that the Dakpema Palace have been directed not to celebrate the ongoing Damba festival.

Mashud Muniru alias 'Chief Abiola' at the Dakpema Palace noted the significance of Umbrellas at festivals, noting that it adds value to traditional rulers and separate them from the population. He told Atinka TV's Ibrahim Nurudeen.

Brief history of the Damba festival

The Damba festival is categorized into three main festivals, namely: Somo Damba, Naa Damba and Belkusi Damba. it is celebrated under the lunar calendar by the people of Dagbon, Mamprugu, Gonja and Nanumba of Nothern Region.

The significance of the festival is to commemorate the birthday of the Holy Prophet of Islam, Mohammed, but the actual content of the celebration is a glorification of the chieftaincy. Damba festival is in effect a thanksgiving festival and a time for families to meet, and socialize, NorthernWebGh report.

It is also for auditing and evaluating the past and planning for the future. This is the period for the Gbewaa family like the Dagbamba, Mamprusi, Nanung, who reside outside return home for the festivities.

Also, Gonjas, Waala and the Mossis celebrate Damba as part of the Tradition.

Activities include prayers and fasting and procession of people on horseback, exchanging of gifts, shooting of muskets and display of warrior dance amidst drumming and dancing.

For the first ten days or nights after the appearance of the new crescent moon of Damba month (on the Dagbon calendar), young people gather at the chief’s palace for dance rehearsals. They are called to the palace by the beating of drums every night.

This is an opportunity for young people to practice their dance forms from the elders. During this time, women may also gather to sing praises to the chiefs for their exploits, enticement and bravery at the palace for ten nights.

On the 11th day of Damba, the second part of the festival takes place. In the morning, the Muslim chiefs and their disciples come to the palace where a bull is slaughtered according to Islamic ritual.

Those present form a circle around the bull and walk or jump over it three times. During this exercise verses of the Holy Quran are recited. The bull is slaughtered and the meat is distributed for feasting.

Hottest Photo Reports
Catch up with all the political quotes from our politicians.
Advertise here
More Social News
ModernGhana Links
15 pesewas reduction in fuel prices insignificant but welcoming – Commercial drivers
Drivers disappointed over 15pesewas reduction in fuel price at only GOIL stations
We'll protect our lands without resorting to violence — Youth of Wasipe
Less than 40% of refugees have registered for relocation
ECG moves district office from Somanya to Juapong
Man carrying AK-47 in Bawku-bound bus arrested at Osino
We don't know All Teachers Alliance group opposing the One Teacher, One Laptop — NAGRAT
Supply laptops to teachers for monies deducted before end of 2021 – GNAT tells GES
Immigration arrests 55 irregular migrants at Tuobodom
TOP STORIES