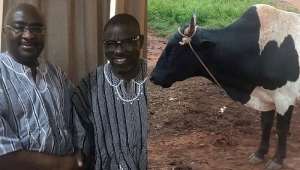 Isaac Adongo, Member of Parliament (MP) for Bolgatanga Central Constituency has extended his sympathy to the Vice President of the Republic of Ghana Dr. Mahamudu Bawumia following the death of his late mother Hajia Mariama Bawumia whose final 'adua' (funeral rites) is slated for Sunday, October 24.

The Bolgatanga legislator on Friday, October 21, 2021, paid a courtesy on Dr. Bawumia at his residence in Walewale in the North East Region.

He presented one huge cow in support of the funeral rites and custom.

During a brief engagement with the Vice President, the Bolgatanga Central MP consoled Bawumia even though, they both share different party ideologies.

Mr. Adongo says, he considers Dr. Bawumia as a senior brother and an inspiration to many notwithstanding the divergent views they share on matters of the economy.

Mr. Adongo noted that the decision of Dr. Bawumia to visit him during the burial of his mother in 2019 left in his mind a great ‘sense of brotherhood that is worth emulating.’

“When I lost my mother, you came and you consoled me. I was deeply touched by your sense of care and even though we have our political differences, it does not take away the fact that you’re a senior brother. On the loss of your mum, I’m here together with some of our Regional and Constituency executives to commensurate with you and to encourage you to be strong,” he said.