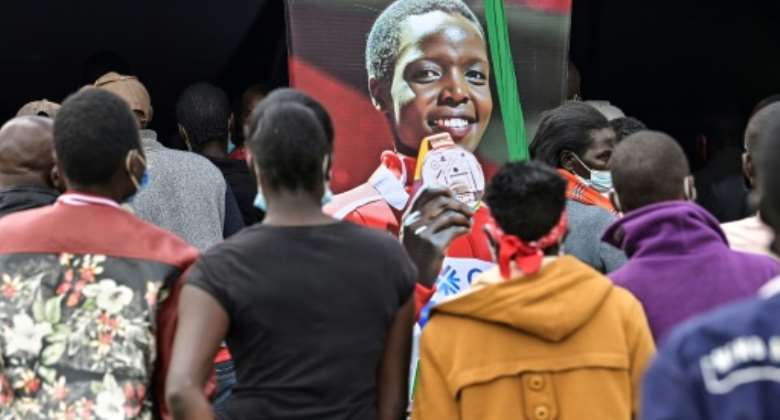 Tirop's death has thrown a spotlight on the pressures faced by the country's female athletes who pay a huge price for their spectacular success in a male-dominated society. By Simon MAINA (AFP)

Olympic running greats came together on Saturday to bid farewell to rising Kenyan star Agnes Tirop, whose murder earlier this month sent shockwaves across the nation and the athletics world.

A double world championships bronze medallist tipped for future stardom on the track, Tirop was buried in a white casket in central Kenya on what would have been her 26th birthday.

Her body was found on October 13 with stab wounds in the bedroom of her home in Iten, a high-altitude training hub for top-class athletes.

Tirop's husband appeared in court this week as a suspect in her killing after being arrested and remanded in custody.

Many in the congregation wore the signature red and black jerseys of Athletics Kenya, which described Tirop as a "jewel" and one of the fastest-rising stars on the international running circuit.

"We have lost not only a capable person, but also a true champion, a generous heart, and a star not only in our country but also internationally," said athlete representative Milcah Chemos.

Her death sparked outpourings of grief and condolences from Kenyan President Uhuru Kenyatta, but also anger at a life taken so young.

'Too young to die'

Impassioned speakers at her funeral demanded swift justice for Tirop, and huge crowds marched in Eldoret on Friday calling for an end to violence against women.

"The injustice against female athletes here in Kenya is a threat to all of us athletes all over the world," said Olympic 5000 metres champion Cheptegei.

"We are here in solidarity to show that we condemn such acts in such a manner."

Tirop's death has thrown a spotlight on the pressures faced by the country's female athletes who pay a huge -- and often tragic -- price for their spectacular success in a male-dominated society.

Many Kenyan athletes see sporting success as their ticket out of poverty and get their start in training camps which are unregulated and notorious hotbeds of sexual misconduct.

In the wake of Tirop's death, current and former elite runners have spoken up about the trials endured by young female athletes.

Many are breadwinners for extended families and vulnerable to financial exploitation at the hands of coaches, agents and even loved ones.

"Don't suffer in silence," said Father Dominic Ratemo, who delivered the sermon during the church service before Tirop was buried near her family home.

"Agnes was too young to die."

Her husband Ibrahim, commonly known as Emmanuel, Rotich, was arrested last week in the coastal town of Mombasa after a dramatic late-night chase. Police had earlier said he was the prime suspect in their case.

Athletics Kenya announced on Saturday that the Kenyan leg of the World Cross Country Tour would be named after Tirop.

Born to a peasant farming family, Tirop launched her athletics career less than a decade ago but swiftly ran up a host of second-place finishes in national and international cross country races.

She went on to become one of Kenya's rising stars -- as the 2015 world cross-country champion, a two-time world medallist over 10000m, and came fourth over 5000m at the Tokyo Olympics this year.