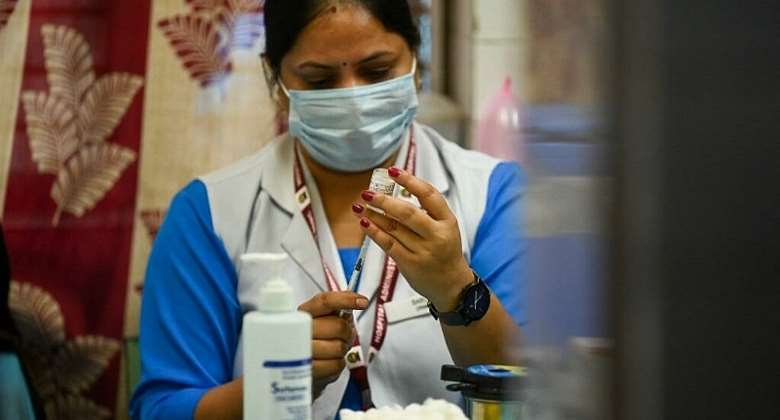 India has reached one billion cumulative doses in its Covid-19 vaccination drive, blighted by a virus surge this summer. It crossed the milestone in 279 days and looked ahead to inoculate all eligible citizens by the year's end.

India now accounts for more than twice the number delivered in the United States, nine times that of Germany and 10 times the number of jabs given in France.

The South Asian nation of 1.4 billion is only behind China which kicked off its program last year and reached the one billion mark this June.

Celebrations also rang out elsewhere and TV footage showed doctors and nurses dancing to peppy numbers in some hospitals. A private jetliner said it will fly the 10 digits painted on its passenger aircraft.

The government was also set to announce the feat on passenger ships, metro trains and rail stations.

Archaeologists will light up ancient monuments as the government said it will launch a song to mark the occasion.

About 75 percent of 944 million Indian adults have received at least one dose. Thirty 30 percent are fully immunized.

"We still have miles to go. I do agree with that," said Randeep Guleria, director of state-run All India Institute of Medical Sciences in Delhi.

"We still have a large number of people we still need to vaccinate, address a number of issues which also include hesitancy and try to get the right doses to everyone especially those who are not able to come to vaccination sites," Guleria told a TV station.

India averaged 2.7 million shots a day since the 16 January rollout of the drive, starting with 30 million healthcare workers and then the elderly from March and two months later it invited people above 18 years.

A record 25 million vaccines were given on 17 September but daily shots in October averaged 5.3 million, a fifth of last month's peak and lowest since July.

Vaccination has not started for those under 18 but India in August approved the world's first DNA vaccine and cleared the locally-made jab for children aged 12 and above.

The health ministry complained a "sizeable number" of Indians were skipping their final dose and added it had stockpiled vaccine with new supplies in the pipeline.

Observers blamed the petering turnout on a chain of ongoing festivals and fear of the disease fading with the number of cases dipping in India, which has logged 34 million infections and 452,714 Covid-19 deaths so far.

"Complacency has emerged among many of the people because they thought that a single vaccine is good enough to protect them so we need to meet this challenge also," said Sarman Garg who heads a state-run hospital in the city of Bhopal.

Rahul Pandit, a member of  the national Covid task force, said it was time to start vaccinating India's children below 18 who comprise 41 percent of the population.

Gagandeep Kang, one of the country's top medical scientists, noted Covid-19 was now to be rated as "endemic" in India.