Poverty and the question of standard of living in Africa: The necessity of a positive mindset in alleviating poverty in sub-Sahara Africa 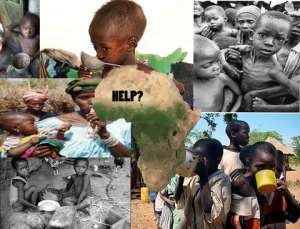 Generally, a person or community is said to be poor when there is a lack of financial resources and essentials for a minimum standard of living. Poverty is better captioned by the United Nations definition: "Fundamentally, poverty is a denial of choices and opportunities, a violation of human dignity. It means a lack of basic capacity to participate effectively in society. It means not having enough to feed and cloth[e] a family, not having a school or clinic to go to, not having the land on which to grow one’s food or a job to earn one’s living, not having access to credit. It means insecurity, powerlessness, and exclusion of individuals, households, and communities. It means susceptibility to violence, and it often implies living in marginal or fragile environments, without access to clean water or sanitation.”(United Nations, 1998).

As can be gleaned from the above, " standard of living" on the one hand, paints the picture of "quality of life" or the indices to measure the well-being of a person or a community of people. On the other hand, poverty not only captures a lack of financial resources but encompasses the inability to afford or control essentials like security, clean water, and living in an atmosphere of marginalization and victimization. It is vitally important to stress that one of the greatest fears of an average human is not only being able to afford necessities of life but essentially the inability to have control over certain events in his life. When this consistently becomes the reality of an individual, this is what I refer to as poverty. Therefore, when a group of people or an individual is\are constantly in a position of vulnerability to sickness, stress, and death or lives under the climate of marginalization such an experience can be considered poverty. Undoubtedly, studies have shown that the greatest instinct in man is that of survival.

“Mindsets are just beliefs. They’re powerful beliefs, but they’re just something in your mind, and you can change your mind.“

To a large extent what becomes of you in life is a reflection of your mindset, a portion of a vastly read holy book puts it this way; "as a man thinks in his heart (mind) so is he". The implication of this is that; we are what we think, the results we command in life are directly proportional to the thought we conceive. In other words, our mindset defines our reality, this is a fact that both historical and present philosophers and great thinkers have agreed to be a universal truth. As Dweck rightly stated, mindsets are powerful beliefs. Evidence from several researchers in the field of psychology reveals that the way we think is what really counts. This is why I believe that although the heat of poverty is real, however, the possibilities in our minds are most real.

The narrative that suggests that rich people get richer and poor people get poorer because of their respective socio-economic backgrounds is a fallacious fad and therefore should not be considered accurate. Contrary to what most people believe, most well-meaning billionaires in Sub Sahara Africa do not thrive solely because they were born in an economically advantaged family. A classic example Is Dangote, the richest man in Africa in the last decade. At the age of 21, Dangote got a loan of $3,000 from his uncle to import and sell agricultural commodities in Nigeria, his home country. Evidence shows that his business venture rapidly became a success, and as a result, he managed to repay the entire loan within three months he kick-started his business operations. Eventually, Dangote was able to turn a local commodities trading business into a multibillion-dollar corporation. There are a few lessons to learn from this business tycoon. Firstly, he took positive and entrepreneurial-oriented action. He convinced his Uncle to borrow him money for business, his positive mindset gave him the conviction to get a loan as supposed to being overly dependent on his Uncle, as some present-day youths would likely do. Hence, he was not a liability or a burden. Secondly, he was visionary and had plans. The loan he got was used for economically productive purposes. Everything boils down to the power of his mindset, plans and actions find expression in reality when the mind has conceived the vision.

I have never viewed poverty as a problem but as a challenge. Poverty never pulled me back; on the contrary, it propelled me forward.”

The impact of one's belief system determines the extent to which poverty can linger in one's life, even if you're born economically disadvantaged, having a positive mindset which in turn influences your sense of responsibility, could make a difference in your life. Talking of responsibility, one of the things a positive mindset will spur an individual not born into a wealthy family is to embrace the " demands" for the financial change (s)he desires, this is equally applicable to a community that desires an economically developed society.

Reginald Abraham Mengi (1943 – May 2, 2019) was a billionaire who was born from a humble family in a village in Nothern Tanzania. He took responsibility to birth a radical change in his life. History has it that his personality, spirit, and character were shaped by his poor background. The title of the book he authored "I Can, I Must, I Will: The Spirit of Success" is a testament to his grit, determination, and unflinching commitment to progress, success, and duty. The title of the book further portrays that he was insistent on changing the historical label his family was known with, and his story had a dramatic impact on the history of entrepreneurship of Sub Sahara Africa and Africa at large.

From the foregone, it is glaring that being born poor is not a death sentence. How to navigate one's path out of poverty is a pertinent question that should be asked and not being complacent. People who defeat poverty do this by being Intentional. Nature forbids anything to work by itself, thus, a positive mindset which in turn makes a resilient spirit can turn tides in one's favor. Africans are hereby encouraged to optimize opportunities to reframe negative narratives.

Ultimately, humans are helplessly at the mercy of their mindset, hence, the realization of African Union Agenda 1, (A prosperous Africa, based on inclusive growth and sustainable development)as well as United Nations Sustainable Development Goals 1, (No poverty) within the African context is heavily dependent on the mental acceptance of Africans of the possibility of these goals; Zero poverty and prosperous based Africa, (particularly the economically disadvantaged Africans) being the key beneficiaries. There are myriads of factors that can make a man poor (such as; economic state of a nation), however, being consistently in a state of abject poverty could be a choice. Whether or not an individual is born with a silver spoon, a negative mindset about life and finances will cripple one's ability to gather or sustain wealth.

It is true that despite the availability of financial services across Sub-Sahara Africa, marginalized Africans would continually be financially excluded if not mentally willing to part ways with poverty. Availability and access to financial services don't necessarily translate to wealth, our mindset coupled with actionable plans make the difference. This is not to suggest that leaders of African States should mindlessly ignore the role of a robust, stable, and favorable economy in minimizing the effects of poverty in each nation. The economic health of each nation plays a key role in enhancing citizens' standard of living or the overall development of a nation. As matter of fact, one of the main drivers of international migration from the Global South particularly Africa to the Global North is the availability of economic opportunities in the latter. This is sadly the reason the word 'japa' (which literally means to run away but contextually means to travel abroad) has fast become a buzzword in the conversation of average Nigerians (especially amongst the youths) and used in reference to the socio-economic context of the nation. Therefore, in addition to educating Africans about the power of a positive mindset in alleviating this global monster called poverty, more financial inclusive systems for economic empowerment as well as financial literacy should be promoted across Sub-Saharan Africa.

▪Poverty is real but the possibilities in your mind are more real.

▪Being born without a silver spoon is not a death sentence, you can knock down poverty when your mind is made up.