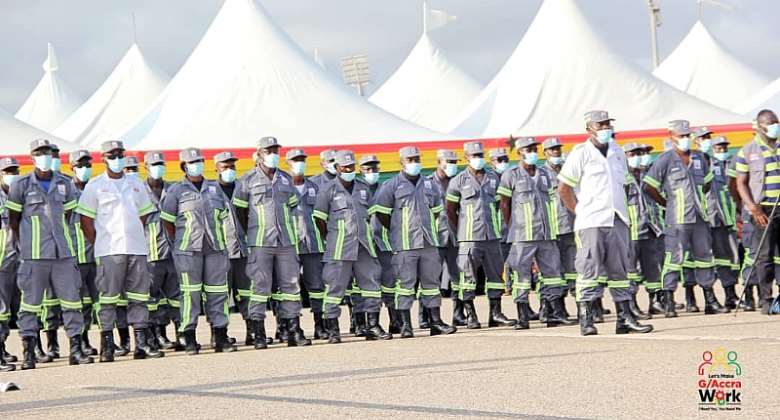 President Nana Akufo-Addo has launched the “Operation Clean Your Frontage” campaign in Accra with a call on Ghanaians to change their attitudes and behaviour towards cleanliness.

He noted that over the years, the challenges with sanitation now go beyond the lack of logistics, enforcement of bye-laws and rules of engagement.

In view of that, the President believes the campaign is a good step in achieving the vision of making Accra the cleanest city in Africa.

“…a challenge which can only be overcome not just by logistics and the bye-laws and the rules of engagement but also by a change in our attitude and behaviour.

“That is why I said at the beginning of my first mandate that it is my determination that at the end of my period as President, Accra will be the cleanest city in Africa.”

According to him, “Operation Clean Your Frontage” is an essential step to ensuring the commitment about Accra becoming the cleanest city in Africa.

The initiative which is scheduled to begin on January 4, 2021, will see to the training of some 3,000 civilians under the “City Responses Team,” and shall be mandated to enforce the bye-laws.

Waste Management Company, Zoomlion has pledged to support the initiative by providing some logistics in addition to personnel.

The Executive Chairman of the JOSPONG Group, Dr. Joseph Siaw Agyepong reiterated the need for attitudinal change to make the initiative a success adding that “after all these years, the company has discovered that attitudinal change and enforcement of by-laws are the two key challenges inhibiting a sustainable clean and healthy environment.”

He stated, “It is therefore very heart-warming when, upon assumption of office of the Greater Accra Regional Minister, Honourable Henry Quartey, launched the 'Accra Must Work' Campaign alongside the 'Clean Accra' by the then Mayor of Accra and his colleagues to make Accra clean."

Zoomlion Ghana, he announced, is releasing logistics and equipment to support the 'Accra Must Work' campaign to achieve maximum impact.

The company, in addition to providing its personnel, would also provide about 85 compactors and 1,000 tricycles to support the initiative.

“It will interest you to know that the company has come out with a new tricycle model and system of operation that will unionise and assist the informal waste collection sector to contribute to the waste management processes in a more formal and organised manner to improve waste collection in slums and poorly planned areas,” he indicated.

Dr. Siaw Agyepong encouraged Ghanaians to take advantage of the laudable initiative to clean their frontage and ensure they play their part in making Ghana a clean and healthy country.

The Greater Accra Minister, Hon. Henry Quartey who expressed gratitude to Greater Accra Parliamentary Caucus and all the liaising ministries and MMDAs explained that the exercise will train 3,500 youth as the task force under the City Response Team to help enforce the 'Operation Clean Your Frontage' agenda.

Hon Quartey who has gained much admiration due to his massive reformation of the city noted that dustbins will be placed at vantage points from Ayi Mensah down to Ridge roundabout and other major roads within Accra to ensure those towns are clean.