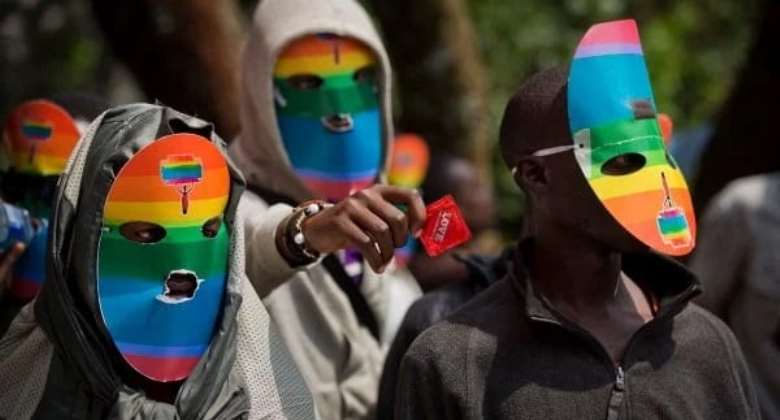 Protestors are masing up at the Ghana High Commission in London today Saturday October 23 – in advance of Ghana's parliament resuming this week – to call for parliamentarians and President Nana Addo Dankwa Akufo-Addo , to reject the anti-LGBTQI+ bill currently under consideration.

Some Ghanaians, diaspora Ghanaians and allies say the bill violates human rights as per Ghana's own constitution and The African Union Charter.

According to them, it attacks Ghanaian traditional values which include tolerance (not hate) and prioritise commitment to family and community. It is often stated that sexual and gender diversity is a Western concept, but protestors maintain that denying the humanity of others and rejecting their right to freely exist, is a product of colonial indoctrination:

“It was Britain, who first introduced homophobia and transphobia to Ghana and many of its former colonies. People are suffering today because of this. It has laid the foundation for this bill, which in 2021 proposes to anchor these violences even more rigidly in Ghanaian legislation,' a press statement quoted one of them, Araba Essumanba, as saying.

Abena adds, 'There is a lot of evidence of our rich LGBTQIA+ ancestry in precolonial Africa. Take the Dagaaba people of northern Ghana. They assign gender based on the energy a person radiates, not based on physical anatomy. In the Precolonial era, and when studied in the late 1900s, the Nzema had same-sex marriages that were just as respected as heterosexual marriages. There is proof of LGBTQIA+ relationships in the Fanti and Akan ethnic groups too. But introduced religions and colonial laws have erased Ghana's rich queerness and fluid way of being.'

Protestors cite evidence of the involvement of the American Christian organisation, The World Congress of Families, in supporting the Ghanaian coalition behind the hate bill. The WCF has a far-right agenda with alleged links to racist and white nationalist movements (openDemocracy https://tinyurl.com/u6a7j6fw ). It has been involved in encouraging movements in other African countries which have gone on to introduce more extreme homophobic legislation.

Prison sentences of up to 5 years for being LGBTQIA+, of up to 10 years for advocacy and even imprisonment for not reporting on family members, are examples of the harshness of this bill.

“This bill is deeply harmful. Apart from the infringements of people's rights to be themselves and prison sentences, this bill requires and mandates conversion therapy. We know this can create severe suffering and long-lasting psychological harm even if people may initially attempt to comply, particularly in such a hostile and dangerous environment. The same is true of forced surgery on intersex children, also required by this bill. This can be akin to torture as is highlighted in UN reports of international research, from 2020', says psychotherapist, Janice Acquah.

Araba Essumanba adds: “We need to apply pressure now because if this bill goes through, organising and advocating will be punishable by multi-year prison sentences. This bill is encouraging stigmatisation which often results in people being disowned, blackmailed and attacked. There is currently a rise in violent attacks and in hate speech. This bill needs to be rejected now.”

UK allies are also calling on the UK government to take action, to engage with the Ghanaian government and opposition leaders and dialogue with Ghanaian activists. They are also calling for the UK to make it clear that there will be repercussions and to sanction those individuals promoting homophobia, by the denial of visas, for example.