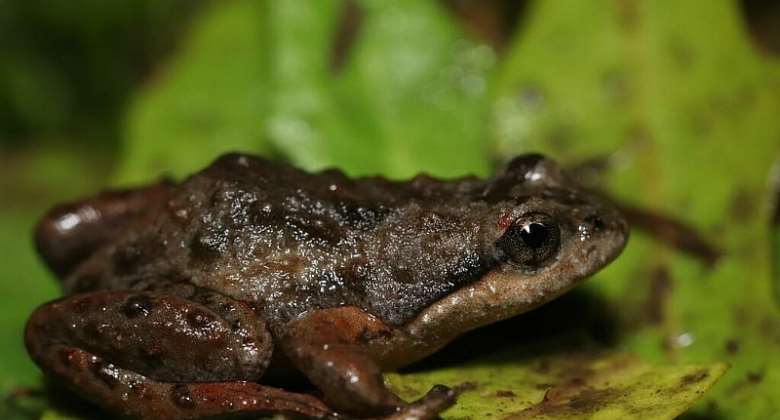 A new population of tiny frogs, each no bigger than a thumbnail, has been discovered near the southern tip of Africa in a vast wetland more than four times the size of Paris.

The population of at least 30 micro frogs, as they're called, were found accidentally in the Nuwejaars wetland system. This 47,000-hectare (116,000-acre) rural district of farms, marshes, rivers and water bodies is located on the Agulhas Plain in South Africa's Western Cape province.

Oliver Angus, a student from South Africa's Stellenbosch University and staff from the Nuwejaars Wetlands Special Management Area (NWSMA), a local conservation initiative, were searching for Cape platannas, another endangered frog species, when they made their find.

“They heard calls and looked for them and that's how the population (of micro frogs) was discovered,” Ross Kettles, the NWSMA project manager told RFI.

Wildlife corridors
The species is listed as critically-endangered by the International Union for Conservation of Nature because wetlands outside of protected areas like Nuwejaars and the nearby Agulhas National Park are threatened by urbanisation, agricultural expansion and alien plant species.

This is only the fifth population of micro frogs currently known to exist in the world. The other four sites, also located on the Agulhas Plain, cover a total of just seven square kilometres. There are only around 100 breeding individuals at each site.

Jeanne Tarrant, an amphibian expert with South Africa's Endangered Wildlife Trust said of the latest find: “This is indeed significant. It appears to represent the most inland record of the species and is thus an important range expansion.”

Another isolated population of micro frogs lives around 18 kilometres away in the Ratel River, inside Agulhas National Park. Experts say that fertilized frogs' eggs, like those of fish, can attach themselves to the legs of wading birds and be distributed to new areas.

Kettles said he was hopeful his team would find more in Nuwejaars which, in addition to being the southernmost freshwater wetland in Africa, is also one of the largest.

Over the past 20 years conservationists in conjunction with the areas landowners and residents from the village of Elim have been creating corridors for wildlife in between cattle and sheep pastures and fields of wheat, barley and canola.

“We're trying to fence the agriculture in so that the wildlife has corridors to move in. Usually it's the other way round -- you fence the wildlife out,” explained Kettles.

'A big experiment'
Buffalo and hippos, exterminated by hunters over a century ago, have been reintroduced.

The hippos open up channels through the wetland and increase water flow. Invasive plant species have also been removed, allowing native species like the palmiet to flourish.

The palmiet, a bulky shrub with long stiff serrated leaves helps to cleanse water and regulate its flow by slowing the water down and helping the peat soils to absorb it and prevent flooding.

It makes for a secure frog habitat.
“The water spreads more gradually and the pans fill up more slowly, which prevents the frogs being washed away into the ocean, or downriver into unsuitable areas,” said Kettles.

He called the rehabilitation work at Nuwejaars a “big experiment” that was “on the right track”.

The discovery of the new micro frog population would appear to be the latest evidence of that.