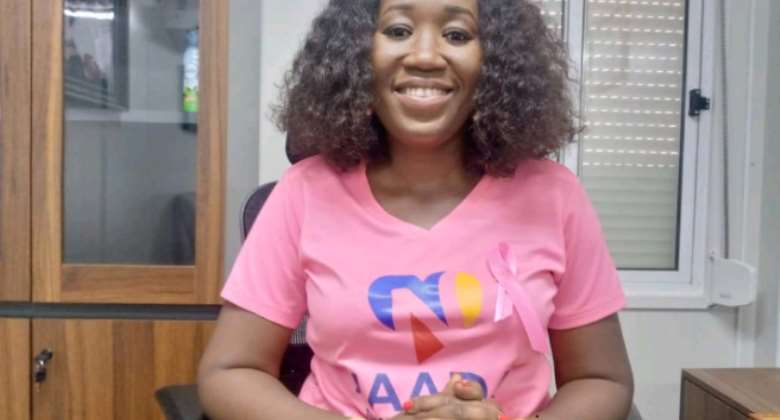 As part of activities to mark this year's breast cancer awareness and protection among women, Naada Jinapor Foundation, run by the wife of Hon. Abu Jinapor, MP for Damongo Constituency has conducted a free breast cancer screening exercise for women at Damongo in the West Gonja Municipality of the Savannah Region.

It was conducted on Friday, October 22, 2021 at the forecourt of the office of the Member of Parliament for the area.

The exercise which forms part of the Foundation's health outreach programs saw over 500 women screened on breast cancer and its related diseases.

The team of doctors and other health professionals who were drawn from the West Gonja Catholic hospital, were at hand to screen for cancer and the various diseases related to breast.

Chief Executive Officer of the Foundation, Mrs Naada Jinapor in an interview with ModernGhana News disclosed that the rationale behind the health outreach aspect of the Foundation was to provide quality health assistance to women in the Municipality.

According to her, the exercise was to also mark "Breast Cancer Awareness Month" which is celebrated globally in the month of October by the World Health Organization (WHO).

She commended the beneficiaries for turning up in their numbers to be screened adding that the exercise isn't political.

The leader of the health professionals, Dr. Obeng Mensah, commended Naada Jinapor Foundation for the screening exercise and appealed for support for the organization to extend similar exercise to others.

He revealed that close to 20 women have been diagnosed with breast related diseases at the time of granting the interview and have since been given drugs.

"We have picked about 16 to 20 abnormalities of which some are breast lumps, nipples diseases and other associated breast diseases," he stated.

He continued, "those abnormalities that we have picked, we will call them individually per their locations and engage them personally with a pathologist for final diagnosis."

He cautioned the public specifically women to be wary of their breasts in ensuring they have good health in order to cater for their children.

Beneficiaries of the exercise, also commended the foundation for the initiative saying it would go a long way to improve the health conditions of their breasts.

Mrs Salamatu Abubakari said, "I heard about the breast cancer screening exercise from my neighbour, and actually when I came, it was true. I had my breasts screened and I have been told nothing is wrong with them so am happy. I will like to thank the wife of our Member of Parliament for this great initiative and we are looking forward to having similar ones in the future."