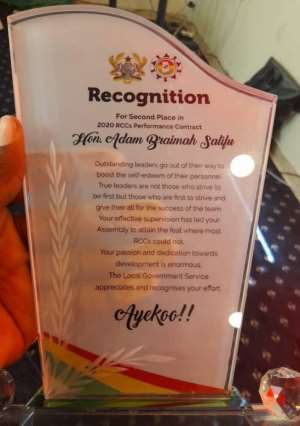 The Savannah Regional Coordinating Council has been adjudged the second best (RCC) in the 2020 annual local governance service performance contract.

The Region was beaten by Volta Regional Coordinating Council to the coveted spot with the Bono East RCC placing third at an award ceremony held in Accra on October 20.

After clinching the coveted spot, the Volta RCC took home a citation and a plague, three computers, two printers, one scanner and two motorbikes.

The Savannah Region which was adjudged second took home a citation and a plague.

A citation read that the Savannah Regional Council's passion and dedication towards development is enormous and that the Local Government Service appreciates and recognizes same.

Aside from a citation and a plague, the Savannah RCC was also awarded prizes such as a motorbike, two computers and two printers.

It is also to develop competencies, increase job satisfaction and achieve the full potential of all staff in the service in line with section 54(f & c g) of the Local Governance Act, 2016 (Act 936).

The contract is operationalised through the Performance Management Instruments (Contract and Appraisals) in which the service enters into agreement and commitment with its employees to set clear, quantifiable objectives and indicators for attainments within given timelines.

The thematic areas for the RCCs include general administration, human resource management, financial management, and services.