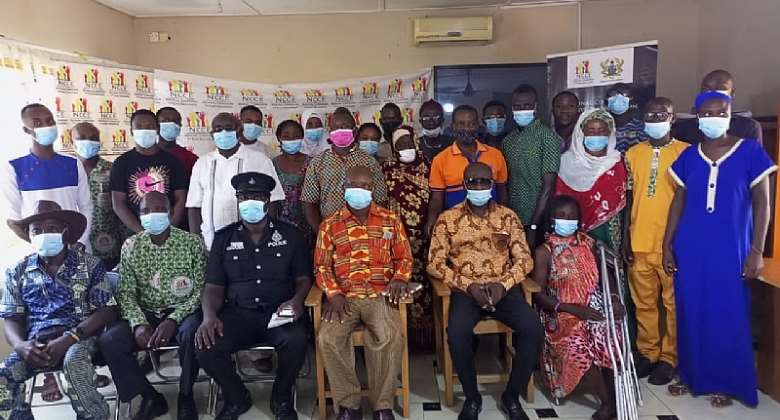 The National Commission for Civic Education (NCCE) of the Krachi West Municipality in collaboration with the Ministry of National Security held an inter-party dialogue committee meeting on Thursday, October 21.

The meeting which was sponsored by the Ministry of National Security was aimed at fostering national cohesion to avoid violence extremism in the Oti Region and Ghana at large.

A 15 minutes film on how violence can destroy lives, properties, and the country at large was shown to educate the participants on the need to choose peace at all times.

The BNI director for Krachi West Mr. John Deh, who was the resource person explained violence extremism as "the unlawful use of force and violence to achieve religious, political and ideological aims.

He stated that unemployment, injustice, Political Intolerance etc, are some of the causes of violence extremism in the country.

Mr. John Deh made it clear that the issue of security nowadays is not for only the security services, but rather a national concern, and for that matter, individuals must always be security conscious.

He encouraged Christians and Muslims to fix security cameras such as CCTV and drones at their places of worship if possible to help curb this menace.

He further urged people to be vigilant within their communities and be each other's keepers. Once you realize someone abruptly begins to distance him or herself from society or friends and does speak anything good but rather violence, we should be able to notify authorities for necessary action to be taken.

He noted that, in terms of an attack on you in your house, don't run out but rather hide until help comes. If you get the chance to call for help, don't rely on only the Police. You can as well call on some opinion leaders for help. Also don't think of your properties when there is an attack but rather your life (self-preservation).

The Oti Regional NCCE Director, Mr. Robert Boamey, who spoke on NCCE position on National Cohesion, said, " National Cohesion is everyone's responsibility to make sure that there is peace in the country all the time".

He also said NCCE from time to time meets communities, churches, and various organizations to teach them about the 1992 constitution and also emphasizes the need to always live in peace and harmony.

He however urged the residents to stop discrimination against others and politicians and also measure their words well when communicating.

"Politicians should have developmental issue base discussions than the unpalatable statements most of them make and if possible, invite resource people to speak to some issues of national interest than political communicators".

Some participants took to the floor during the open forum section to express their joy about how educative the meeting has been to them and also urged the NCCE and its partners to keep doing such programs frequently.