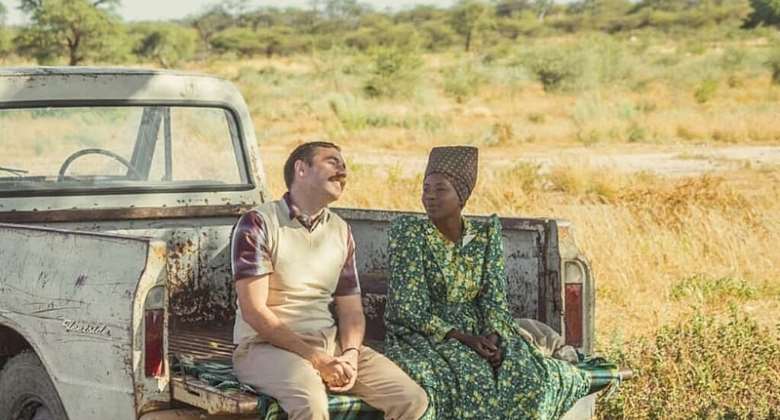 Love in a racially segregated country comes with consequences that a black woman and white policeman must face in director Desirée Kahikopo-Meifret's The White Line, a Namibian movie showing at the Fespaco Pan-African film festival in Burkina Faso.

The movie begins in 1990, the day of Namibia's independence, as two white people speaking Afrikaans are watching the ceremony on TV. The wife worries their lives will be in danger, now that blacks have independence. The doorbell rings.

Next, we travel back to 1963, to when Namibia was called South West Africa, an apartheid state run by whites.

Sylvia, (in a brilliant performance by Girley Jazama), a young maid who works for Anna-Marie, a racist Afrikaner woman, endures the daily abrasions as an African woman in a segregated society.

“Part of this is taken from the history of my mom and her mom before that, because they were both maids, so I got to hear about what they went through as casual workers,” says Micheal Pulse, the screenwriter and producer for the film.

The story unfolds as Sylvia ends up also working for Anna-Marie's brother Pieter, a policeman. He's much kinder than his sister, initially letting Sylvia borrow books.

We see two separate worlds – Sylvia's, where she lives in a shack on the outskirts of town with her melancholic father and happy-go-lucky cousin, and Anna-Marie's white world of running water and indoor plumbing.

But Pieter falls in love with Sylvia, even though it is forbidden under the apartheid government. Initially resistant, Sylvia is eventually won over by love letters that also discuss the racial situation and the power imbalance between them.

Although it is a risky proposition to discuss her feelings, she lets her guard down and writes with honesty and emotion, revealing the true Sylvia.

Pulse says that the screenplay was a collaborative editing effort with director Kahikopo-Meifret and lead actress Jazama, based on an idea by the director.

“I think it was easy for me to write because it had a lot of relatable issues that I have gone through that still go on in Namibia,” says Pulse, on the sidelines of the Fespaco Pan-African film festival, where the movie is up for the top prize.

“There is racism, where people see it, but they don't talk about it. It's subtle,” he says.

His own experiences as a Namibian and the culture at large helped him to write the character of the racist Anna-Marie.

“I wanted to explore different facades of how people become racist, because you just don't wake up and say, 'Oh I feel this way',” he says.

The movie ultimately reveals why Anna-Marie, played by Sunet Van Wyk, behaves as she does, because of an earlier trauma.

The tightly written screenplay contains a major plot twist at the climax of the film that is impossible to anticipate.

An ode to love

Pure emotion works as a driving force for the two main characters.

“We're focusing on love, because we're trying to have conversations about what it means to love somebody from a different race, background, religion, creed, tribe, all of that,” says Pulse.

“We're also trying to show you that love transcends hardship, as long as you fight for it, in terms of those confines of what love means to both of you,” he adds.

Ultimately, the movie is not just about the racist apartheid system, but about the power of love.