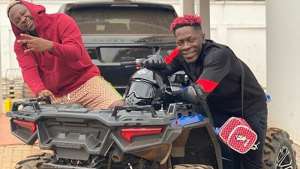 Rapper Samuel Adu Frimpong popularly known as Medikal has been remanded into prison is custody for illegally brandishing a gun in public.

He will be spending five days in Ankaful Medium prison in the Central Region with his colleague musician Shatta Wale who took the lead yesterday.

The 'La Hustle' singer who was in court to give moral support to Shatta Wale was yesterday seen in a video on social media brandishing a gun.

He was subsequently arrested by the police and held in custody.

He was also hauled before an Accra Circuit Court charged with one count of displaying arm and ammunition in public to which he pleaded not guilty.

His lawyer Emmanuel Yeboah Gyan had pleaded with the court to grant the accused person bail pending the trial.

But the prosecution led by Chief Inspector Dennis Terkpetey opposed the application saying the case was still under investigation and the accused when granted bail will interfere with investigations.

The court presided over by His Honour Emmanuel Essandor in his ruling took into consideration the right and safety of the larger society as against that of an individual and remanded Medikal into prison custody.

Latest Photo Reports
Catch up with all the political quotes from our politicians.
Advertise here
More Headlines
ModernGhana Links
The Clerks of Parliament walked me to my reserved seat in the Chamber but I opted for the public gallery — Asiedu Nketia
You’ve always made me proud as your wife – Lordina celebrates Mahama at 63
Court issues warrant for arrest of Xavier Sosu for 'disrespect'
Swiftly intervene to pull the country together amid majority, minority impasse – Adongo to Akufo-Addo
My presence in Parliament gingers, inspires NDC MPs – Asiedu Nketia
2022 budget: We're shocked, disappointed in Majority attacks on Bagbin – NDC caucus to majority
The days where you had majority to bully minority are over – Haruna Iddrisu jabs NPP MPs
Mahama clocks 63 today
You're an 'irresponsible' bunch for 'running away' from own budget; blame yourselves – Minority fights Majority
TOP STORIES