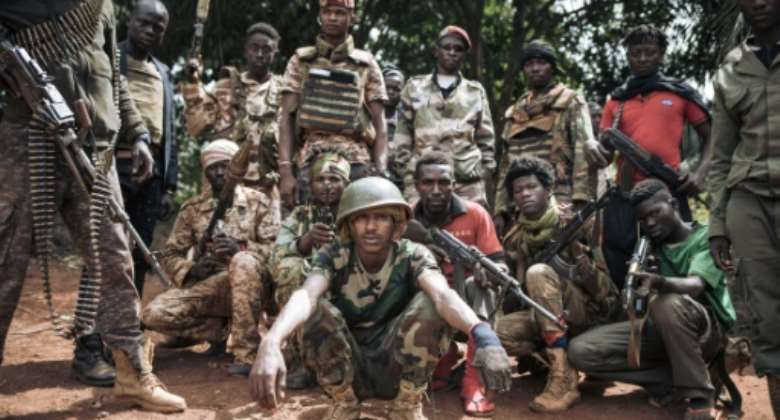 Most rebel groups, including the CPC seen in January near the DR Congo border, have agreed to a ceasefire but analysts fear the truce is based on fragile ground. By ALEXIS HUGUET (AFP/File)

A week after the Central African Republic's president surprised observers by calling a unilateral ceasefire, experts and the country's opposition warn the truce may prove unviable.

President Faustin-Archange Touadera issued the ceasefire declaration, vowing to pursue dialogue, and said all but two of the main armed rebel groups had agreed to put down their weapons.

But there is as yet no start date for a "republican dialogue" Touadera promised on his re-election and reiterated as he ordered the halt to hostilities.

Meanwhile, his spokesman Albert Yaloke Mokpeme told AFP that "our objective is to get rid of the rebellion -- one does not engage in a dialogue with those who take up arms."

"You make peace with your enemies, not your friends," he added.

One of the world's poorest nations, the CAR has repeatedly been wracked by conflict since obtaining independence from France in 1960.

Civil war broke out in 2013 after a coup toppled president Francois Bozize, who had seized power a decade earlier.

While that conflict has dropped in intensity in the past three years, unrest remains rife.

Since 2007, there have been 13 peace accords and a welter of ceasefires but none has held in the long term.

Last December, the Coalition of Patriots for Change (CPC), an alliance of armed groups which together occupied roughly two-thirds of the country, launched a major offensive aimed at preventing Touadera's re-election.

Having won a second term, he promptly called in the help of a Russian paramilitary group and Rwandan elite troops to aid a floundering army as the rebels closed in on the capital Bangui.

The armed forces were then able to wrest back control of several rebel-held towns.

Rwandan UN troops outside Bangui -- but it is the support of Russian paramilitary forces for the government which concerns some observers. By FLORENT VERGNES (AFP/File)

Even after the ceasefire, two rebel groups have broken withe the CPC's openness to dialogue.

One, the Union for Peace (UPC), the country's most powerful armed group, quit the CPC alliance last April.

Opposition lawmaker and former prime minister Martin Ziguele says the government must bring the rebels inside the peace tent.

"If armed groups lay down their arms it is a contradiction to keep them outside political dialogue," Ziguele told AFP.

"We shall see what the government proposes but to refuse to allow them in risks throwing everything up in the air," he warned.

Thierry Vircoulon of the French Institute of International Relations (Ifri) suggested the truce offer could be designed to polish Bangui's image with international partners, a month after a Luanda summit of neighbouring states and the UN underlined the need for a ceasefire.

"The true condition to make a ceasefire stick is that the president engages in inclusive dialogue," CPC spokesman Serge Bozanga told AFP.

"Touadera is just playing for time so he can reinforce himself militarily."

A UN soldier on patrol in Bangui. By FLORENT VERGNES (AFP/File)

Much will likely depend on the difference Russian mercenaries can make as they fight alongside the government's poorly-equipped and -trained army.

France and the UN -- which has a 12,000-strong mission in the country -- have accused them of "possible war crimes" and of making money notably through taking over gold and diamond mining areas.

The rebels remain capable of harassing the government forces even after beating a retreat and being forced to change tactics by the losses of their fiefdoms.

From holding sway over much of the country a year ago, they have switched to guerrilla tactics and the use of improvised explosive devices.

President Touadera has vowed to pursue a peaceful dialogue but observers warn his olive branch is not inclusive enough. By Barbara DEBOUT (AFP/File)

"The rebels disperse easily and have time to reorganise," says Ceri expert Marchal.

Lewis Mudge of Human Rights Watch predicts they will continue to operate across several territories and "kill civilians."

Even if the rebels are not presently an existential threat to Touadera, "they can wear the government down financially," notes Marchal.

You cannot preach e-Levy when gov’t appointees continue in s...
49 minutes ago