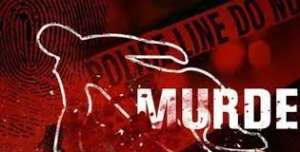 A 30-year-old woman believed to be suffering from high fever has butchered her two-year-old son to death.

Hannah Akua Afriyie, the main suspect, who committed the crime at Agyarko-Buoho, in the Brofeyedu Electoral Area, Afigya Kwabre South District, has since been arrested.

Akua Afriyie is believed to be suffering from high fever and that has been making her act strangely.

He stated that Akua Afriyie's high fever surfaced on Sunday around 5pm when her husband was at church.

According to him, Akua Afriyie was brandishing a sharp machete which put fear in the tenants of the house.

The Assemblyman said some people later mustered courage and disarmed the suspect, but unfortunately, she had killed her son.

Akua Afriyie has since been arrested by the police in Kodie.