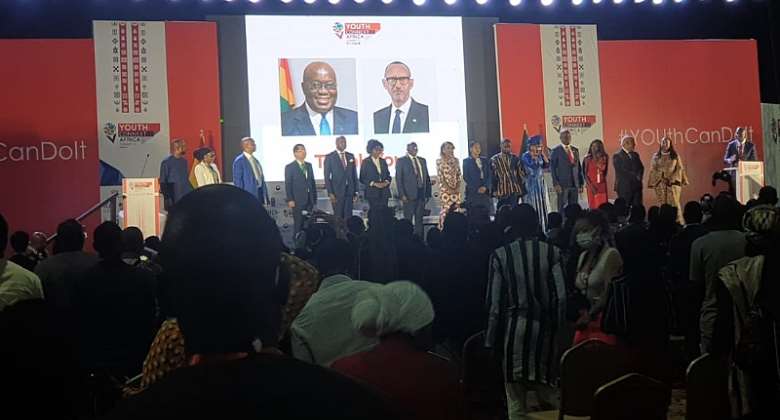 The Vice President of the Republic of Ghana, His Excellency Dr. Mahamudu Bawumia has charged African leaders to invest immensely in human capital development.

He said increasing investment in young people is the key, which includes promoting quality education that prepares them for future opportunities.

"A diversity of training will be needed in secondary school, technical and vocational education school, teachers college etc. in order for young people to explore opportunity economic skills in Africa. They must have the skills and training necessary to keep the value in them. In doing so, Africa must fashion educational policy that's also gender sanity,” he stated.

He noted that the 21st century is a century of Science and Technology in which youth must be challenged if indeed they might survive in this innovative technology environment.

According to him, Africa has the largest population of the young generation in the world; useful in their capacity and can shape the future and give Africa the light it deserves; yet too many people are trapped in poverty.

He observed that South Korea, Singapore, Malaysia, are currently where they are due to the systemic investment made in developing their human capital.

He added that the lack of employment opportunities had undermined social and political stability, repeating 12 million young people in Africa joining the labour force year which Africa must pay attention to.

Dr. Bawumia indicated that about 40% of the Africa population are between the ages of 15-24 making it the youngest continent in the world. This, he said, represents a stable amount of human capital which is said to double in 2045.

"According to the World Bank, 60% of Africa youths are unemployed. For those that manage to find work, they do not do so in a place that pays a good wage to develop their skills or provide a measure of job security. No one needs to tell us that Africa is sitting on a time bomb. Lack of employment opportunities can undermine social and political stability, repeating 10 to 12 million youth joining Labour force every year Africa must pay maximum attention," he intimated.

The Vice President added that young people are willing to risk everything to improve their circumstances.

“What this means is when we provide the right government, they will make the continent great if this you're is encouraged to spend considerable energy at home, and Africa will experience huge economic growth".

He stressed that there are evidence steps to help Africa countries achieve the demographic dividend and realize the best potential of the youths present.

Dr. Mahamudu Bawumia, however, called on all African leaders in one way or another to learn from each other as they come together with a collective effort to develop the continent.

Hon. Rosemary Mbabazi, Minister Of Youth And Culture, Rwanda, speaking on behalf of the President of Rwanda, H.E Paul Kagame on her part said, it is very imperative to come together to redefine and redesign creative ways for youth to participate in economic transformation.

She said Africa stands the chance to transform its lead debts with innovative skills which can impact humility.

She, therefore, urged the youth to take advantage of the opportunity presented by the Africa Continental Free Trade Area agreement, saying it is the pillar of accomplishment of Africa growth because its implantation revealed the true force of Africa.

Ms. Ahumna Eziakonwa, UNDP Assistant Administrator and Director, Regional Bureau for Africa, taking her turn to speak said the theme “Africa Beyond Aid: Positioning the Youth for the Post COVID Economy and AfCFTA Opportunities,” is a very important and timely one.

She said the possibility that the continent of Africa can thrive without charity and that the people of Africa are taking their destiny into their own hands was critical.

“This is very much about dignity; Today’s reality also speaks of a different truth. That poverty is on the increase in general, and that extreme poverty, in particular, is rising at alarming proportions. This is a trend that has been exacerbated by the COVID 19 pandemic – but one that nonetheless exposes the fault lines in the development models that prioritized neither provision of services, inclusion, nor maximizing of Africa’s resources for Africa’s development," she said

She pointed out that the UNDP is partnering with the International Trade Centre to fill this knowledge gap particularly on trade intelligence, market information and targeted support for women and the youth.

Touching on Africa Continental Free Trade Area (AfCFTA) Ms Ahumna Eziakonwa said, AfCFTA – enabled tariff structure that brings down 90% of tariff lines, there is a better than before opportunity to add value without the wrath of punitive tariffs.

“Therefore, I leave you with a call to get engaged. Seize the opportunity. Create those Made in Africa products. At UNDP Africa, we truly believe in the transformative potential of the AfCFTA – and Africa’s Money working for Africa’s Development. UNDP will work steadfastly to translate the ambition and promise of the AfCFTA into opportunities for young people", she stated.

YouthConnekt Africa is a Pan-African program established to co-design and accelerate relevant solutions for youth socio-economic development, and to support intergovernmental knowledge exchange on policy, programs and partnerships.

Warnock wins Georgia run-off against Walker to win the Senat...
22 minutes ago