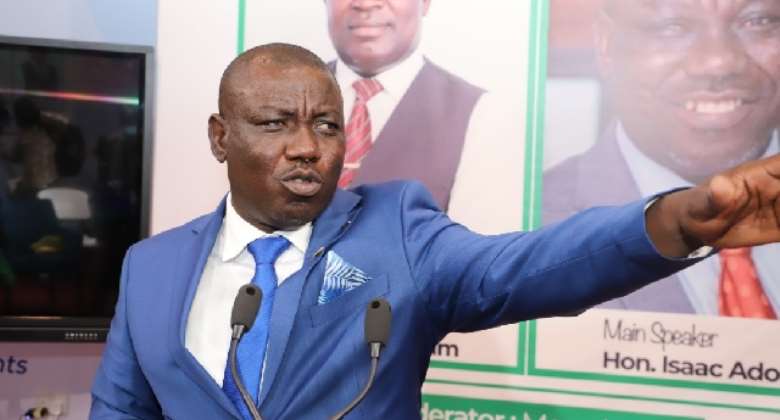 Member of Parliament for Bolga Central, Isaac Adongo has described President Nana Addo Dankwa Akufo-Addo as a “clueless and visionless president” for causing the collapse of the Komenda sugar factory in the Central region.

Nana Akufo-Addo had earlier said the NDC, led by former President Mahama, built the factory when they had no raw material to produce the sugar leading to the shutdown of the factory.

But Mr Adongo in a Facebook post, said “sugar cane is perishable. No sensible person grows sugar cane to get rotten waiting for a factory”.

According to him, it was the president’s turn to grow the sugar cane and he failed.

Nana Akufo-Addo has, however, repeated that the factory collapsed soon after it was opened because the government at the time made no provisions for raw material supplies.

According to him, Mr Mahama himself, could not access some $24 million grant from the government of Indian to provide the raw material because the factory collapsed immediately after it was built.

About a week ago, former President Mahama said his government had plans of establishing a sugar cane farm around the factory to provide the raw material for production but that part of the project, he bemoaned, has been ignored by the Akufo-Addo government since taking office in 2017.

He told Cape93.3FM in an interview in the Central Region during his Thank You tour on Friday, 15 October 2021 that his vision for setting up the factory was to cut down on the almost $300 million spent annually to import sugar into Ghana.

“Phase I of the project was to build the factory and with phase II, the government of India gave us another $24 million for sugar cultivation and the out-growers”, Mr Mahama explained to Ohene Kwame David.

“When this government came, they said the sugar factory wasn’t their priority and, so, they didn’t apply for the $24 million and, so, they left it and the factory is just sitting there”, he complained.

According to the 2020 flag bearer of the main opposition National Democratic Congress (NDC), the second phase of the project was designed to provide the raw material for the factory to make it self-sustaining.

“Do you think I’m a fool to build a factory and not make provisions for raw materials? I’m not that foolish. I did economics in the sixth form”, Mr Mahama pointed out.

“So, I knew what the vision was: get the factory first and, so, when we start producing, we’ll have a processing plant”.

“So, it was one of our priority projects”, he added.

He said: “There’s about 3,000 acres of land at Komenda, so, we planned doing a nucleus farm to feed the factory with raw materials and use the remaining balance of the $24 million to buy sugar from the out-growers in the area.”

“We’ll give them the planting materials because our sugar cane variety is very thin compared to the very think hybrid variety which has a lot of sugar in it”, he noted.

“So, the factory would buy the sugar cane from the out-growers”, he said.

“But even if you privatise it, you still need the support of the farmers to grow the sugar cane”.

“If we come back into government, by the grace of God, and they have not sold the factory yet, it’s a factory that can work to produce a very good percentage of Ghana’s sugar requirement and provide the youth in the area with jobs”, Mr Mahama said.

Responding directly to the former president, Nana Akufo-Addo told Accra-based Peace FM’s Kokrokoo host, Kwame Sefa Kayi, that: “It’s amazing some of the things you hear because the reality, the facts on the ground tell you a completely different story”.

“Immediately after the commissioning on the 30th of May 2016, the factory was shut down because of lack of raw materials”, he explained.

“Soon after”, he noted, “a transaction advisor who was appointed by the then-NDC government – I think it was PricewaterhouseCoopers – came to try and assist the government to sell 70 per cent of the share in the factory. And all this is happening in the Mahama era; it’s not my time”.

“Up and down, up and down, no progress [was made]. Why? Because the fundamental issue which has dogged the Komenda Sugar Factory is the absence of a plan for the supply of raw material. It makes it a very very difficult project”, the president said.

He then asked: “Why didn’t the Mahama government go for that $24 million? The money was there before he left office; why didn’t he access it?”

“But, in fact”, the president continued: “It was going to be difficult to access the money because the factory itself that he had built had collapsed”.

Therefore, “Are you going to tell people you want some more money when the thing that you are doing is itself on the backfoot?”

Asked what he meant by the factory had collapsed, he said: “The shutdown of the factory, how do you understand it?”

“Immediately after you built a factory, then you bring it down for [maintenance]? It was shut down for lack of raw material to feed the factory and this is the point that I’ve been making: that the whole planning of the Komenda Sugar factory was wrong from the get-go”, he stressed.

“What we have been trying to do, what Alan Kyerematen has been trying to do – the very valiant effort that he has made – is to try now, to reconfigure the investment in such a way that he has now access, also, to raw material supplies for the factory”, Mr Akufo-Addo emphasised.

He said: “I think the work that has been done between him and the transaction advisor and the board of the company, is now in the situation whereby God willing, by February, next year, we will have got the Komenda Sugar factory working again. This is the target that they have”.

“When you come back to it then you understand how it is that the poor planning continues to be an albatross around our neck – how sustainable is it? Because the initial planning never properly incorporated raw material supplies into the project because if it had been so, we would not be in this discussion today”.