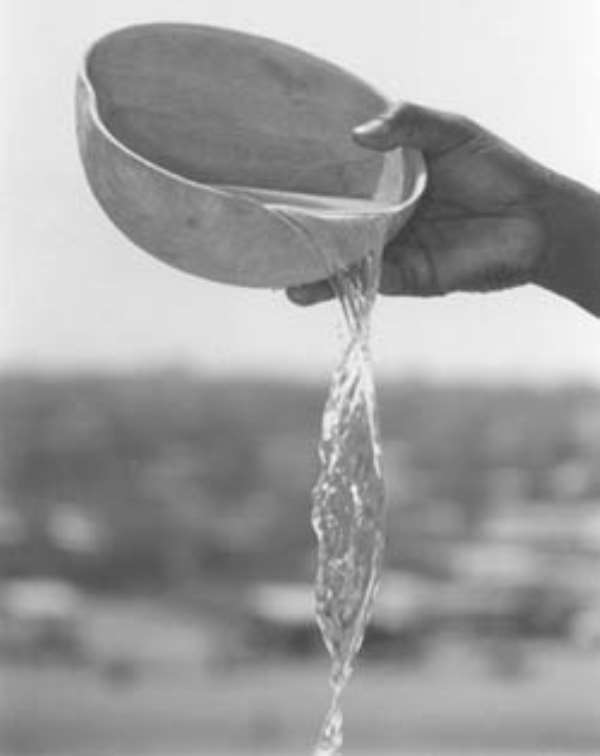 In an interview that appeared on Ghanaweb, dated August 22, the Minister of Works and Housing, Mr. Yaw Barima, is reported to have said that the President, Mr. Kufour, has made a definitive policy to involve the private sector in Ghana's water industry and nothing has changed to warrant a review of the President's policy. The Minister's statement conjures up scary memories of this government's bungling of major policy issues such as, HIPC, Sahara deal, IF*C loan, the $20,000 car loan for MPs, and the infamous Zero Tolerance on Corruption. We have seen enough from Mr. Kufour to give him a freehand to “formulate” policy on the most essential and vital natural resource in the country – water. These days, it appears the British International Development Minister, Mr. Clare Short, has a strong stranglehold on our President and his cabinet. It was this minister who lured Mr. Kufour and his cabinet into accepting HIPC status by promising the government 200 million British pounds a year for five years in aid money. Without hesitation and due diligence, the government precipitously signed up for the HIPC program. It is also the same Mr. Clare Short who told the government that it would get aid money for a major water project only if Kufour and his cabinet effectively privatize Ghana's water supply. Suddenly, we now have water policy from our President. Obviously, Mr. Short must be scoring high political points in Britain for giving his country's multinational companies a field day in Ghana's water industry. These instances would indicate that the President's “policy” on water is no policy at all, especially, considering the manner with which his infamous Zero Tolerance policy on Corruption has been implemented. It is not surprising therefore that to date the Zero Tolerance policy lacks the infrastructure and legislative support to make it effectual. On HIPC, a notable Ghanaian, Mr. Akoto Ampaw (no relations), Coordinator for Jubilee 2000, wrote on March 2, 2001, that “The Kufour government therefore has a choice to make: if it simply intends to survive as a government without any great ambitions of moving this country forward, then clearly, it has something to gain in joining HIPC, and adopting another IMF structural adjustment programme… If however it seeks to tackle the socio-economic problems of this country from the root, and move us forward as a proud and able people, then it ought to reject HIPC without a second thought.” Indeed, every policy of Mr. Kufour for the past 20 months has been recklessly in sympathy with the survival of his government, without the slightest consideration for the overall health of the economy. If self preservation is the sole driving force behind his policies then he should commit all resources available to him to ensure that his policy on water meets the test of probity and transparency, because unlike HIPC, IF*C loan, Zero Tolerance policies and others, water privatization will have direct and immediate consequences on the already stretched Ghanaian electorate. The process of converting water formerly subject to many non-market rules into one that is primarily subject to market rules must deserve special scrutiny and control, and any efforts to privatize or commodify water must be evaluated far more carefully by all stakeholders. Because water has vital social, cultural, and ecological roles to play in our society, and because there is a direct link between consumption and payment in the market place – if you do not pay, you do not consume – some of the consequences of privatization may be irreversible ecologically, and disastrous economically. It is therefore imperative that we demand from this government openness, transparency, and strong public regulatory oversight of contracts pertaining to the water industry. What form would the President's water privatization policy take? Privatization of water can take many forms, some of which are, the transfer of the responsibility from the government to the multinationals to operate a water delivery or treatment system, or a complete transfer of system ownership and operation responsibilities, or even the sale of publicly owned water rights to multinationals. Also, what are the impacts of privatization on Ghana's eco-systems, and what safeguards has the government put in place to ensure that privatization efforts would not ignore impacts on ecosystems or downstream water users? Will privatization neglect water-use efficiency and conservation improvements, and will there be assurances from the government that privatization will not worsen the prevalent economic inequalities and the affordability of water? Will the government guarantee a basic water quantity under any privatization agreement for all residents in a service area, e.g. will residents in Sodom and Gomorrah be guaranteed basic water quantity as residents in East Legon? Mr. Yaw Barima cannot simply brush off public demand for transparency in the President's water policy. In fact, it behooves the minister to take the President's water policy on the road – to the cities and towns, and to the far corners of the country – and explain to the people of Ghana the importance and necessity of such policy for their development. We need real answers.