'Night Nursery': a compelling look at Burkina's sex workers and their babies 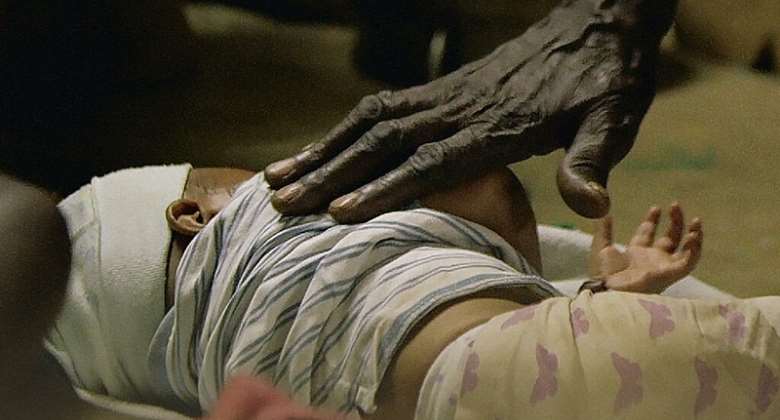 A portrait of sex workers caring for their babies and the elderly grandmother-types who watch their children when they are on the streets at night sets the scene for Burkinabé director Moumouni Sanou's “Night Nursery,” in contention for best documentary this year at FESPACO, the Pan-African film festival.

The documentary, shot in a 'fly on the wall' style, gives an overview of the lives of sex workers in Bobo Dioulasso, Burkina Faso's second largest city and economic capital.

10-year process
Filmmaker Sanou initially hadn't thought of shooting a film about the women who give their babies to an elderly grandmother while they work at night. The 'grandmother' earns little more than a euro per child per night.

Making the documentary took 10 years, says Sanou, because he had to gain their trust first.

“I wanted to do the documentary because I realised these are good people, but badly regarded,” he tells RFI.

“I didn't judge them, I didn't stigmatize them, and when I crossed them on the street, I said 'Hi'; when they had small problems I tried to help them, without thinking twice,” he adds. It was when he saw the grandmother and her way with the babies, he knew he had found a good subject.

No dialogue
The documentary shows the women interacting with each other and with the grandmother as they drop their children off for a night of work. Sanou says that he purposely did not have actual interviews, because the images already explain everything.

“I didn't want to put in dialogue, I wanted to leave it as it is, to show another side of these women,” he says.

“They laugh, and yes, they are in wretched circumstances, but there have been so many films made here in Africa to speak about misery-- I think that we need to stop this right now,” he adds.

The grandmother-type child minder does explain in the documentary that she is getting old, and tired, so the more wiggly older children are watched by her daughter-in-law.

Sanou was touched by the way they take care of their children, which includes paying the grandmother to watch them at night.

“There are a number of sex workers who leave their children alone in the house while they are working—newborns, babies, totally alone!” says Sanou.

“Many times they give their children medication or sleeping pills so that the child will sleep until they return home,” he says adding that they would be in danger if something like a fire broke out, or there was an accident.

The documentary shows how the women live and deal with their circumstances, a view not often seen in Burkina Faso. The mainly Burkinabé audience at the first showing of “Night Nursery” gave a resounding round of applause at the end.

“I can't describe how happy I was when I saw the reaction of the Burkinabé public when watching my film,” he says. “They understood the message.”

The film was so well received, that Sanou says the manager of the movie theatre wants to show it after the festival.

“It's the first time that a Burkinabé documentary shown at FESPACO has been picked to feature in a regular cinema here,” he says with a smile.

'We will stand united to oppose e-levy' – Haruna Iddrisu but...
25 minutes ago