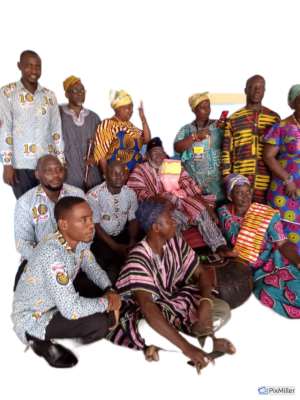 The Tamale Zonal Office of the National Pensions Regulatory Authority (NPRA) as part of this year’s Annual Pension Week Celebration has paid a courtesy call on the Chief of Zung, Zung Naa Colonel Mahamoud Tahiru (RTD) in the Bamvim Traditional Area of Tamale in the Northern Region.

Speaking during the courtesy call, Tamale Zonal Head of the NPRA, Mr. Yakubu Alhassan Fuseini underscored the significant role traditional leaders play in the development of the country.

As a regulator of pensions in the country, the NPRA’s visit was to apprise him (Zung Naa) of what the Authority was doing to ensure that workers in Ghana had a secure retirement income.

The visit, the Zonal Head of the NPRA explained was to also create the platform and relationship that will enable the NPRA collaborate with the Zung Naa to use his influence as a traditional leader to advocate for pension enrollment and penetration in the Northern Region especially among the informal sector.

Mr. Yakubu said old age poverty was prevalent among the aged in the Northern part of Ghana, more so among informal sector people, and the surest way to curb it was for people to begin to plan towards their retirement by contributing to the informal sector pension schemes setup by the NPRA. He thanked the Zung Naa for the warm reception he gave to the NPRA.

In his welcome remarks, the Chief of Zung, Zung Naa Colonel Mahamoud Tahiru (RTD) thanked the NPRA for the visit and praised the Authority for working so hard to improve pension operations in Ghana. He said pension plays an important role in the lives of retirees and that was why every active worker must pay attention to his retirement by consciously planning for it.

The Zung Naa, who is also a retired Colonel from the Ghana Armed Forces and a Member of the Council of State representing the Northern Region, pledged his support for the NPRA in championing the advocacy for pension enrollment in the Northern part of Ghana.