The police must release Shatta Wale immediately and apologise to him 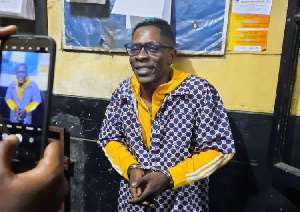 The alleged act by Shata Wale, faking a gun attack on himself on 18th October, 2021 is a Soft-Protest against the failure of the police to guarantee his rights to peace, safety and security as a citizen of Ghana.

Over the years, so-called pastors and prophets, fame-chasing, have been pronouncing deaths against very prominent citizens of Ghana, in the name of prophecies. Former President J.A. Kufour, H.E. The National Chief Imam, and the former Captain of the BlackStar, Abedi Pele, are the few of the many victims who had to live in Fear and Panic during those periods. Those reckless and so-called prophesies had caused some of the victims mental, emotional, and physical trauma. Some victims had lost investors as they anticipated them dying soon. Freedom of religion does not give any pastor the right to cause Fear and Panic to any Ghanaian and the general public.

In all the above death pronunciations, including the very second one on the life of Shata Wale by the so-called and fame-chasing pastors and prophets, the police never taken any step, known to the public, to investigate if the so-called men of God were planning anything sinister against their victims. The police never acted, known to the public, to arrest those so-called men of God for the damage their reckless death pronunciations were causing the individuals, families, friends and the general country, the Fear and Panic.

No amount of police intelligence, ongoing investigations and arrest of criminals have ever brought back to life any victim of murder. Were the police waiting for Shata Wale to be gunned down and killed before they act?

Shata Wale has the right to protest the failure of the Ghana police administration to guarantee his right to peace, safety and security. Through an act, Soft-Protest, rather than demonstrating on the streets, he chose to communicate the Fear and Panic he has been living in and the police doing nothing.

That intelligent, noble, and selfless act of Shata Wale, allegedly faking a gun attack on himself, as a soft- protest, to communicate the Fear and Panic he and his friends and family have been living through has now forced the police to act to arrest the so-called pastor. By this act of the police, sending a strong message to all the other pastors, the general country will not live through Fear and Panic with a new list of very prominent people who would die in 2022.

Shata wale is a hero. He has saved many from mental and emotional trauma, and the general public from fear and panic, from 2022 and beyond.

Shata Wale is a hero and should be celebrated and rewarded and not punished.

Author: Peacebuilding at the Edge of Death (listed on Amazon.com)