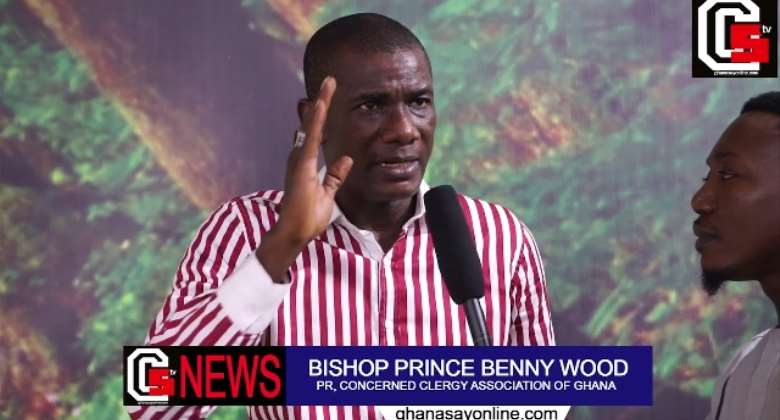 The president of the Concerned Clergy Association of Ghana (CCAG) has urged the police administration to be wary of some of their actions toward spiritual matters.

Bishop Prince Benny Wood of the church group said the unruly behaviour exhibited by the police in the arrest of Jesus Ahoufe, founder of New Life Kingdom Chapel International at the premises of Accra FM is an act considered as antagonizing the spiritual realm.

He was quick to remind the police administration that matters of revelation and prophecy are matters of the spiritual realm and not canal.

Bishop Benny Wood gave the warning on the back of the refusal of the Police to grant the embattled Jesus Ahoufe known in private life as Stephen Akwasi Appiah bail despite spending 48 hours in police custody.

Speaking on Accra 100.5 FM’s morning show dubbed ‘Ghana Yensom’ hosted by Kwame Appiah Kubi on Thursday, 21 October 2021, Bishop Benny Wood said the police acted overzealously in the matter of the prophecy released on 28 September 2021 by the embattled pastor that a popular dancehall artiste called Charles would be shot dead on 18 October 2021 just as Lucky Dube was shot dead in South Africa.

“It is not clear what crime the pastor committed to warrant his continuous detention in custody,” he said.

“If the police in recent times consider prophecy and revelation a threat, then Christian activities such as evangelism among others are under serious threat,” he added.

He stated that going forward, it will be difficult for pastors to go about doing what they have been called to do and cautioned the security service not to allow itself to be used to undermine the Christian faith.

Immediately withdraw your directive to Goil; it's dangerous ...
16 minutes ago