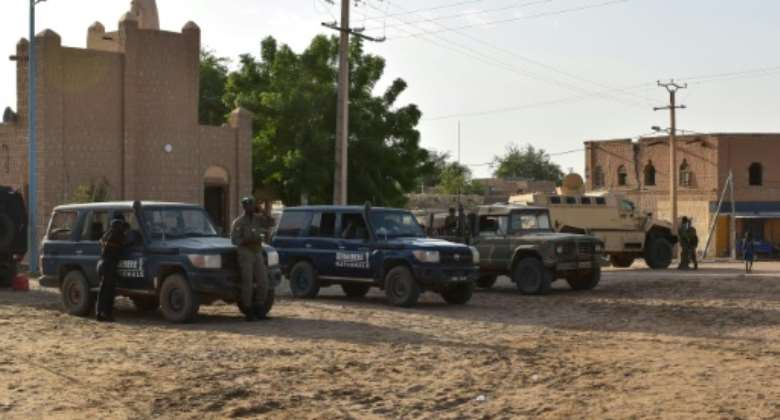 Since first emerging in the north in 2012, the Islamist insurgency has swept into central Mali and spilled over into neighbouring Burkina Faso and Niger.

Insecurity remains rampant and violence appears to be spreading, despite the presence of French and UN troops.

Engaging the Islamists in dialogue to try to stop the fighting is an increasingly accepted idea in the nation of 19 million people, experts say.

Paris has long viewed talks with jihadist groups as anathema, however. France has lost 52 soldiers in combat in the Sahel since first intervening in Mali in 2013.

Ibrahim Yahaya Ibrahim, a Sahel researcher at the International Crisis Group (ICG) told AFP that in Mali's capital Bamako "there is hardly a public meeting" during which the dialogue issue doesn't come up.

Map showing zones of influence by armed groups in the Sahel.. By (AFP)

The move formalised a policy of unofficial sit-downs. However, it is likely to complicate already fraught tensions with France.

Mali's strongman Colonel Assimi Goita overthrew the leaders of an interim government in May and was declared interim president himself, worsening relations with France.

He also defended the plan to hold talks with jihadists in an interview with Jeune Afrique magazine this week.

"The Malian people have been calling for discussions with these groups for years. This does not mean that we are going to stop the fight against terrorism," he said.

Mali's interim Prime Minister Choguel Maiga says talking to the jihadists does not mean an end to the fight against terrorism. By KENA BETANCUR (AFP/File)

"In Afghanistan, the Americans ended up talking to the Taliban," Maiga added, drawing a comparison that has become commonplace in Mali.

Baba Dakono, a Bamako-based analyst, said war weariness has made Malians more amenable to talks. But the fact that the Islamist fighters are locals is also a factor.

Sitting around a table with jihadists is also an old idea in Mali.

For example, a national dialogue in 2017 ended on recommendations that the government talk to the main leaders of the al-Qaeda-aligned Group to Support Islam and Muslims (GSIM) group.

Former Malian president Ibrahim Boubacar Keita also endorsed such talks last year, before he was overthrown in a military coup in August 2020.

Mali's current army-dominated government is now due to host another national dialogue, during which there is a "strong chance" jihadist talks will be discussed, Dakono said.

Opponents of talks point to Afghanistan, which fell to the Taliban in August despite the US government having opened talks with the hardliners through Qatar.

But supporters argue that the key difference lies in who conducts the negotiations: Mali's national government would lead the dialogue rather than a foreign power.

Talks, if and when they take place, may cover how to apply sharia law, potentially touching on issues such as dress codes and the prohibition of alcohol and tobacco consumption.

France has lost 52 soldiers in combat in the Sahel since first intervening in Mali in 2013. By Ludovic MARIN (AFP/File)

GSIM already applies sharia in areas it controls. But ICG researcher Ibrahim Yahaya Ibrahim cast the group as "pragmatic" compared to the Sahel branch of the Islamic State organisation, for example.

GSIM has refrained from cutting off hands or stoning people in order to avoid tensions, he said.

Militants from the group also rely on local Islamic judges to implement sharia, an area in which Ibrahim suggested the government in Bamako could reach "common ground", since it has also sought to bolster the role of these judges.

But armed groups -- jihadists or self-defence militias -- will be loath to abandon territory captured from the state, she said.