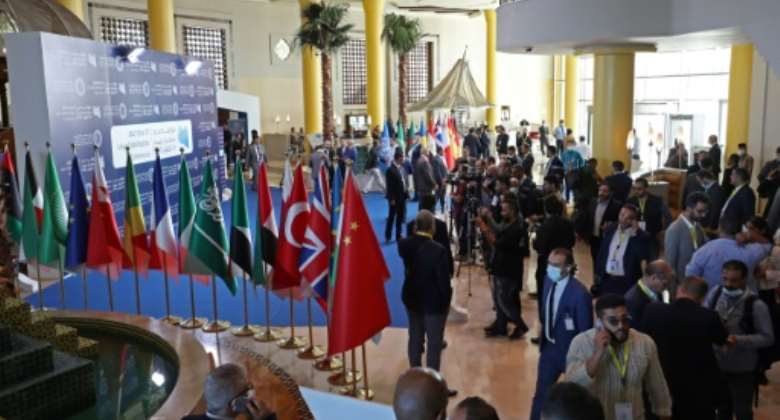 Officials and media gather at a hotel in Tripoli for an international conference aimed at supporting stability in Libya. By Mahmud TURKIA (AFP)

Libya's fragile unity government hosted an international conference Thursday to drum up support as the war-battered country gears up for a landmark December election.

"Your presence is proof that we are on the road to peace," said the head of the interim government, Abdelhamid Dbeibah, promising that the vote would be held "on time" and urging "respect for the results".

Libya and the UN have been striving to turn the page on the violence that has wracked the country since a 2011 NATO-backed uprising toppled and killed dictator Moamer Kadhafi.

A ceasefire between eastern and western factions last year led to the unity government taking office in March with a mandate to take the country to elections.

"Tripoli has recovered. It is the capital of all Libyans," Dbeibah said in his opening speech at the Conference in Support of the Stability of Libya, the first of its kind to be held in the country for years.

The presidential vote is set to take place on December 24, but legislative polls have been delayed, with a date to be set in the new year, amid wrangling between factions in the country's east and west.

Foreign powers have backed various sides in Libya's complex war, and the presence of mercenaries and foreign troops is one of the toughest obstacles to a lasting peace.

A picture shows a billboard commemorating pro-Kadhafi Libyans killed in post-2011 confrontations behind a damaged tank, in the city of Bani Walid, about 180 kilometers southeast of the capital. By Mahmud TURKIA (AFP/File)

The UN Under-Secretary-General for Political Affairs, Rosemary DiCarlo, insisted on the importance of the December elections to "complete the transitional phase".

She called on international organisations to send "special envoys to observe this operation" and to guarantee its transparency.

As Libya faces multiple accusations of mistreatment of irregular migrants, DiCarlo urged authorities to speed up the repatriation of refugees stranded there and to release migrants in detention.

Foreign powers have been pushing hard for the election to be held as scheduled, after the date was agreed at UN-led talks last year.

The meeting aims to "gather the necessary support, in a transparent way" for the vote, said Mangoush in a video published by her ministry on Sunday.

French Foreign Minister Jean-Yves Le Drian was expected at the conference, along with officials from Italy, Turkey, Saudi Arabia and Egypt. The US was to be represented by Yael Lempert, a senior State Department official.

The process toward the elections has been beset by sharp disagreements over the legal basis for the vote, which Libya expert Emadeddin Badi said was "becoming more precarious by the day".

But, he added, the conference aims to "capitalise on the momentum to see Libya stabilised, because several countries do actually want to see a stable Libya, even if on their own terms".

A major focus of the conference was the presence of foreign fighters, said Mangoush, who labelled them "a threat not just to Libya but to the entire region".

Last December, the UN estimated that 20,000 foreign fighters were present in Libya.

They include Russians sent by the shadowy Kremlin-linked Wagner group, African and Syrian mercenaries and Turkish soldiers deployed under a deal with a previous unity government at the height of the last round of east-west fighting.

The minimal progress since a January deadline for their departure under a ceasefire deal reflects the complexity of the issue.

Earlier this month, a joint commission of eastern and western military commanders agreed a roadmap for their departure -- but it lacked a timeline.

Tripoli has said a "very modest" number of fighters have left.

Also on the list of Libya's woes is the question of integrating and unifying the country's armed forces under a single command -- forces that as recently as last year were firing at each other.

And while in theory the country has a unity government, its east is largely controlled by military strongman Khalifa Haftar, widely expected to stand as a presidential candidate but despised by many in Libya's west.

Thank you for the wonders of Ghanaian culture, tradition — S...
11 minutes ago