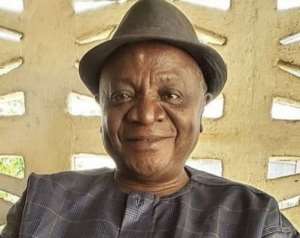 It very well may have been too late by the time that the Akufo-Addo-purchased ambulance which carried Storytelling Highlife King Daasebre Nana Kwame Ampadu, I, to the University of Ghana’s ultra-modern Medical Center reached the latter destination. But the fleet of ambulances that expelled National Democratic Congress’ stalwart Mr. Bernard Allotey-Jacobs once glowingly described as “Angelically antiseptic” – that was what got the retired Central Regional Chairman of the National Democratic Congress (NDC) fired from his party, to begin with – did, after all, get safely to the University of Ghana Medical Center (UGMC). Now, we may bicker about temporal essence; but we also need to soberly and humbly bear in mind that prior to the Temporal Ampadu Predicament (TAP), as it were, absolutely no viable and/or worthwhile system of emergency response existed at the National Ambulance Service (NAS).

To be certain, there was in existence practically and absolutely no “system” or “protocol” to talk about. And this was perfectly in keeping with the gross and much remarked administrative incompetence of the leadership of the Mahama-led regime of the National Democratic Congress. Which, of course, brings us to the imperative need to recognize the undeniable fact that as it pertains to all institutional establishments in the country, functionality is squarely predicated on experiential or empirical longevity. In other words, systemic efficiency comes with long-established practice. Which logically translates into the imperative need for the general Ghanaian public to exercise the requisite patience while the present clearly untenably deficient system, for lack of a more appropriate word, corrects and/or perfects itself.

Now, what the preceding means is that if the response level of our National Ambulance Service is to continue to significantly improve, then it absolutely goes without saying that the government and the political establishment that created the present very promising system, warts and all, must be jealously protected and fiercely retained both at Jubilee House and Parliament. We simply do not change visionary and successful ship pilots or captains midstream, such as the unconscionable nation-wrecking leaders of the country’s main opposition National Democratic Congress are desperately trying to do. Administrative competence and efficiency do not function this wise. Which is why as Ghanaians move steadily towards the December 2024 Presidential Election, in particular, but the 2024 General Election as a whole, the most progressive eligible Ghanaian voters ought to be studiously looking forward to retaining a Mahamudu Bawumia-headed New Patriotic Party (NPP) government.

We do not want the chaotic and wasteful construction of shlocky empty hospital buildings; we want hospital buildings that are fully staffed with well-trained doctors and nurses and the requisite number of clinical paraprofessionals and the necessary state-of-the-art medical supplies and equipment. Infrastructural development must mean that these architectural landmarks are functioning at full human-resource capacity. The construction of roads and highways must also come with efficient and comprehensive motorist and pedestrian education and efficient architectural utility. It is this abject lack of the organic and functional marriage between structures and their efficient use that culminated in the much-speculated avoidable death of Daasebre Nana Kwame Ampadu, I.

I also watched a WhatsApp videoclip in which the host of a program that quite objectively, at least by Ghanaian standards, sought to cast the medical and technical foibles or deficiencies that may very well have significantly contributed to the much-speculated preventable death of Nana Ampadu paint the general quality of healthcare delivery in the West with oversized and exaggerated brushstrokes and colors that I could scarcely and comfortably identify with, having lived right here in the United States of America for some 40 years. You see, the fact of the matter is that true, the general quality of healthcare delivery hereabouts is palpably and significantly better in the United States than what prevails or passes for the same in our largely “shithole countries” and economies, my profound apologies to former US President Donald John Trump. But it also goes without saying that America’s healthcare system is not without its own palpable kinks and deficiencies when it comes to factoring in such significant variables as race, gender, ethnicity and class or one’s socioeconomic background or profile in the general scheme of our social order.

As well, one’s geographical location, which the host of the aforementioned WhatsApp videoclip conspicuously left out of his discursive rejoinder vis-à-vis the quality of healthcare in Ghana. In other words, even here in the United States, while the response time of an Emergency Medical Services (EMS) team may not be significantly different, for the most part, whether one is rich or poor, the unignorable fact still remains that the general quality of healthcare delivered to the poor and nonwhite citizen or resident has been objectively and scientifically proven to evince remarkable disparity. White-American citizens and residents living in relatively plush suburban neighborhoods or communities are far more likely to receive above-average medical care and/or treatment than their ethnic minority counterparts in both rural and inner-city communities around the country. But, of course, put into the context of global totality or perspective, the level and quality of healthcare delivery afforded racial and ethnic minorities here in the United States of America is still much better than what generally prevails in many a Third-World country and economy.

To be certain, much of the healthcare wars, largely over health insurance budget for the poor and destitute, routinely gets fought over between this country’s two major political parties, namely, the donkey-symbolized Democratic Party (DP) and the elephant-represented Grand Old Party (GOP) or the Republican Party (RP), is invariably and inescapably between two political camps who believe that the poor and destitute are far less deserving of the maximum level of comfort and access to the best quality of healthcare delivery, on the part of the Republican politicians, for the most part, and those who believe that the poor and destitute, in spite of their generally abject lack of socioeconomic privileges, are, nevertheless, fully deserving of readily accessible healthcare delivery of the best quality, on the part of the Democrats.

This is partly what the currently raging heated debate over budgetary allocations and infrastructural development in the United States’ Congress is squarely and inescapably about. We also see the same level of disdain for healthcare delivery for the poor scandalously mirrored in the argument of those relatives of Daasebre P S K Nana Ampadu who claim that the ambulance that ferried the late Highlife great to the hospital ought to have arrived at lightening speed because the patient concerned was no ordinary Ghanaian. A mindset that is rather pathetic and unfortunate.