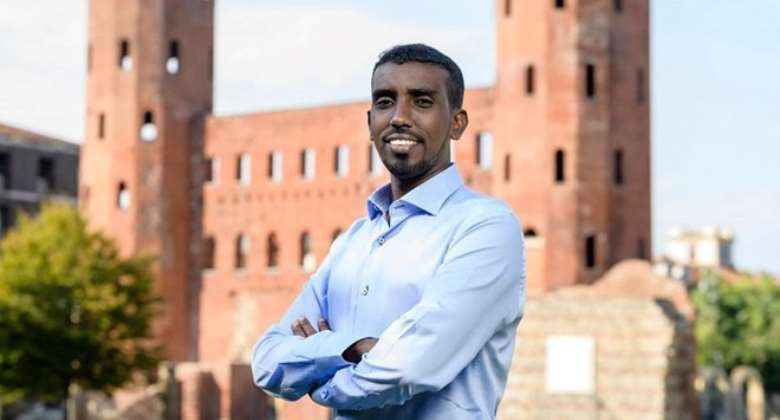 He braved the desert and the high seas at the height of turmoil in Mogadishu in 2008 and for seven months, Abdullahi Ahmed Moalim kept the dream alive against the odds of the dangerous journeys taken by many Somalis but survived by a few.

This week, Moalim was elected a Councillor in Turino City in Italy becoming the first Somali immigrant to occupy the position in about 25 years. He garnered 1112 votes in City Council elections conducted on October 17.

Upon arrival in Italy in 2008, Moalim integrated into his new home and eight years later in 2016, he was granted citizenship.

"I declared my candidature in July after the Democratic Party convinced me to run for the seat in October elections. We launched a two months campaign which was fruitful and helped us secure the seat," Moalim said in a media interview.

Asked about his priorities, Moalim said he aspired to fight Islamophobia and was intend on seeking the Council's approval for a day every month to create awareness on countering Islamophobia.

Moalim now joins the ranks of Mohamed Aden Sheikh who was elected to Turino City Council in 1997.

He also enters the club of growing number of Somalis who have been elected into office in countries such as Canada and the US.

Hottest Photo Reports
Catch up with all the political quotes from our politicians.
Advertise here
More Somalia
ModernGhana Links
Press Statement Issued From The Presidential Palace Of Somaliato Laud And Appreciate All Those Involved In The Long-Running Maritime
SJS condemns recent arbitrary detentions, threats against journalists' safety in Mogadishu, Qardho and Garbaharey
Panel Discussion on Safety of Journalists and Human Rights Defenders during the Elections concluded in Mogadishu
Veteran journalist assassinated in Mogadishu suicide attack
State media director killed; others injured by a suicide bomber in Mogadishu
Widely Condemned Eviction And Deportation Of Southerners From Self-Proclaimed Republic Of Somaliland
Federal Government Of Somalia Had Set Seven Days Ultimatum To Africanunion Envoy To Absquatulate The Country
Long-Delayed Polls For The Lower Chamber Of The Parliament Hadfinally Kicked Off
Universal Suffrage That Will Destigmatize Semi-Autonomous Region Of Puntlan
TOP STORIES

'We will stand united to oppose e-levy' – Haruna Iddrisu but...
3 minutes ago