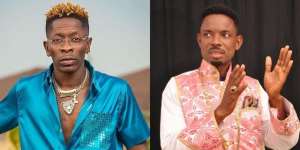 The lawyer seeking bail for the head pastor of New Life Kingdom Chapel International, Stephen Akwasi Appiah, also known as Jesus Ahuofe is unhappy over the detention of his client by the police.

The embattled pastor was arrested in Rambo style at the premises of Accra 100.5 FM on Tuesday, 19 October 2021 over a prophecy, he made about controversial dance hall artiste Shatta Wale.

Lawyer Frank Afrifa said his client is frustrated by the actions of the police in refusing to grant him bail.

“How can you keep somebody in custody for more than 48- eight hours for just making a revelation on a radio programme?” Mr. Afrifa quizzed.

He said the police are treating the issue as if Jesus Ahoufe fired a bullet from an AK-47.

Speaking on 'Ghana Yensom' morning show on Accra100.5FM, with host Kwame Appiah Kubi, Mr. Afrifa noted that the action of the police in denying his client bail was as if his prophecy about Shatta Wale was a bullet from an AK-47.

He wondered the degree of crime the pastor had committed to warrant the police to deny him bail after 48 hours.

He said the actions of the police is worrying and in breach of the fundamental human rights of the pastor.

Jesus Ahuofe had prophesied on 28 September 2021 that a popular dancehall artiste called Charles would be shot dead on 18 October 2021 just as Lucky Dube was shot dead in South Africa.

A month after the prophecy, he was arrested after Shatta Wale and two others staged a fake gun attack on the same date the pastor mentioned in his prophecy.

Shatta Wale and the two others Kojo Owusu Koranteng, also known as Nana Dope, and Eric Venator, alias Gangee have also been arrested and in police custody for the circulation of information intended to cause fear and panic.