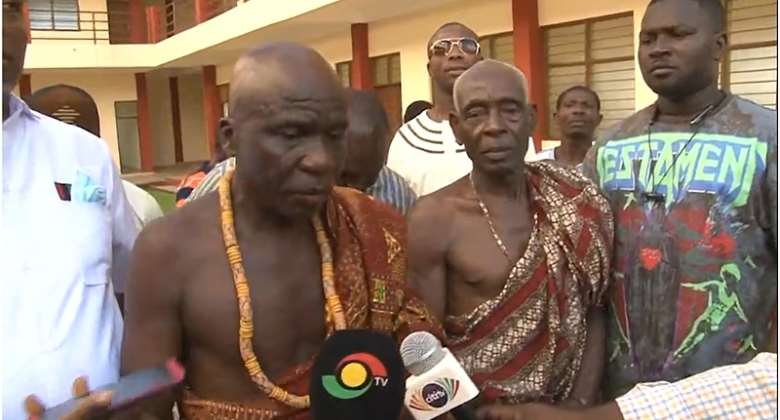 The Chief of Apesua in the Yilo Krobo of the Eastern Region, Nene Bawa Tetteh, has criticised the Akufo-Addo government for abandoning the community Day Senior High School in his community since 2016.

The Apesua Community Day SHS started by the Mahama administration was handed over to government by the contractor last year.

But the facility has not been operating, a situation that has angered the traditional leader.

He indicated that rodents have taken over the facility which was meant to educate Ghanaian children.

He asked the government to open one of the e-block community day schools completed and handed over to government after a year or risk prolong protestation from the people.

“I am not happy with what is happening to this facility. I was part of the sod cutting for this project because of the interest of my people and so I don't understand why this government has not opened the school,” he told journalists on Wednesday October 20.

“Rodents have taken over the facility. I want the government to open the school this year otherwise they will have to come and carry the building away and let me use the land for other things,” he added.

The minority in parliament has wondered why the schools are not being used when they have been completed.

The minority side touring abandoned educational sites in three regions of the country say the Education Minister, Dr Yaw Osei Adutwum must up his game.

Builsa South lawmaker and a ranking member on the Education Committee of Parliament, Dr Clement Apaak said “As the chief said, those he knows who are attending this school are rats and cats, not the students who are the future of his community.

“His grand sons and daughters, they are still in the farms and in the bush when the school has been completed in excess of one year.

“What could possibly be the explanation? That we have a completed school building, we have students willing to attend that school, we have students who are in other parts of the region who will want to move closer to home to attend a school in their own backyards being denied access.”