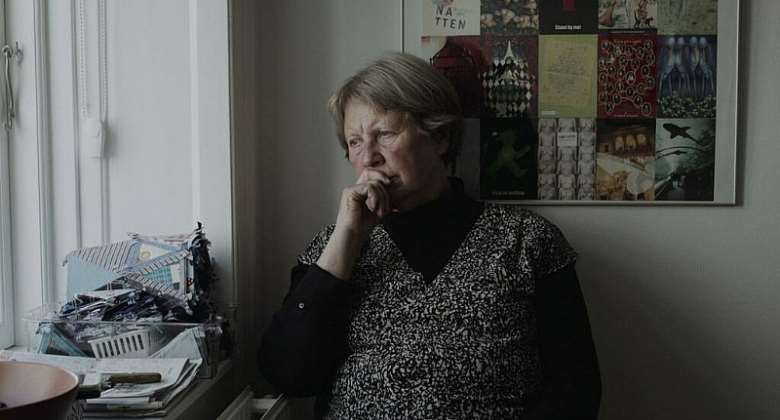 Nigerian-Danish documentarian Jide Tom Akinleminu was in the process of finishing a documentary on his father, a poultry farmer in Nigeria, when he stumbled on a new truth - his father's solitary life was concealing another secret.

“I found out that it was all just a façade that he had a second family that he kept secret from us,” says Akinleminu, who outlined the process of understanding and digesting this truth in “When a Farm Goes Aflame”, his new documentary showing at FESPACO Pan-African film festival in Ouagadougou, Burkina Faso.

“In the new film I'm focusing more on the character of my mother, and her role in the situation of not knowing the full story, accepting things [without] knowing,  [aned] deciding not to ask questions,” he says.

It's a raw take on how he, his sisters, and above all, his mother, process this painful truth, when she and her childre had always  believed that the marragie was a monogamous one.

Using flashbacks based on short home videos and a reading of of Akinlemu's mother's letters written to loved ones in Denmark in the early 1970s, he offers vivid descriptions about his mother's new life with her husband in Nigeria.

The family lived in Nigeria until the early 90s, when they decided to relocate to Denmark for better access to good schools. Akinlemu's father, not finding work, eventually returned to Nigeria, even though his parents were still married.

The family made regular visits to each other, and it was during these visits Akinlemu met his brother.

“When I first found out about the second family, they basically revealed themselves to me…I knew them already, but not as family,” he tells RFI.

“I knew my half-brother, and met him several times. At one point, he couldn't keep the façade anymore so he let me discover that we're family,” he adds.

Family deceptions
Throughout the movie, the soft-spoken Akinlemu questions his father about his choices and his deceptions, continuing to press him when he refuses to answer.

The revelation of the second family proved difficult to deal with, he says, but ultimately his mother began to readjust  to her life in Denmark.

“That manifested [itself] in a decision to divorce my dad, because she didn't want to participate in that kind of marriage,” he says of his mother.

This newfound freedom as a single woman has been cathartic for Akinlemu's mother, who needed to deal with the hurt before she moved on, he says.

“The other chapter, before, that was based on a lie and needed to be closed, which was a painful process for her, and for others,” he adds.

In one scene, she sits on a park bench opening an envelope from Nigeria that contained the filing for divorce. Akinlemu's father signed the division of resources request, but refused to sign the petition for divorce.

“Now that she knows that her husband is not really her husband, or he's not what she thinks it is, she can now make her own choice of what she wants to do, and she decides on this divorce and he doesn't acknowledge that,” says Akinlemu.

“It must have been extremely frustrating,” he says.

At one point, serious health issues plague his mother, causing her to re-examine her life yet again.

“Paradoxically, or tragically, it helped put some things in perspective,” he adds.

Although this doesn't seem to be the sort of documentary to which lends itself to artistic flourishes, the imagery - from chicken blood flowing in a gutter to the use of family movies, - softens the harsh blow of reality.

Yet another twist in the story is revealed and pursued by Akinlemu, eliciting gasps from the audience and which he thiniks provides insight into the decisions his father has made.

The documentarian had the blessing of his father to shoot the movie, but his father hasn't seen the movie yet, nor does he seem particularly interested and he has no desire to push him to view it. Their relationship is not as close as he would like it to be, he says.

“Seven years ago I found out the deception, everything came out, so why not be completely open now. It's a bit tense, this relationship, but we're still trying,” he adds.

'We will stand united to oppose e-levy' – Haruna Iddrisu but...
37 minutes ago