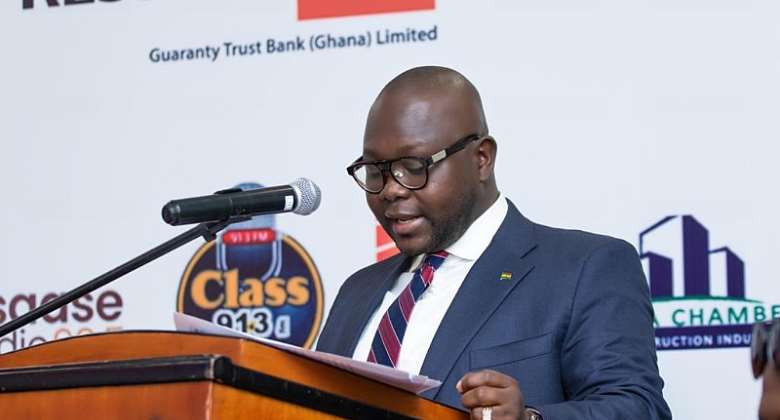 The Minister for Works and Housing Mr Francis Asenso Boakye has campaigned for the use of local raw material for the construction of infrastructural projects ongoing across the country.

He said, his outfit is poised to be the torchbearer in the use of local construction materials.

"This drive has arisen because of its attendant benefits of reducing construction costs in the long run. It is envisaged that every developer who wants to partner government in this affordable housing drive will incorporate the use of the local building materials, such as, burnt bricks, compressed earth blocks etc. in the construction of these affordable housing units," he stated.

Speaking at the maiden edition of Business 24 Real Estate Conference on Tuesday, October 19, 2021, in Accra, he said the development of the housing sector is an important instrument for economic growth.

According to him, the country has not been to provide housing that will need and financial capacities of the majority of Ghanaians requiring some level of support to access housing; this, there is a great disparity between housing cost and income level of people which raises the question of access and affordability.

Speaking o the theme: "Affordable Housing for Every Ghanaian; A myth or Possibly", said there is a need for deeper collaboration between government and the private sector to create the needed opportunities to make it possible for the majority of Ghanaians to have access to decent, safe, secure, quality and affordable housing.

Defining Affordable Housing as Housing that is reasonably adequate in standard and location for low-to-middle income households and according to the UN-Habitat, families who pay more than30 per cent of their income for housing are considered cost-burdened and may have difficulty affording necessities such as food, clothing, transportation and medical care.

Emphasising that housing to be deemed as affordable, the housing cost should not exceed 30% of a household's income be it for purchase, mortgage, rental or rent-to-own although recent policies allow for 40 per cent of incomes to service third party commitments.

Adding that, the government have struggled to provide housing at a cost affordable to the low-to-middle income population and this can be attributed to our inability to supply housing that meets the generally low-income levels of the majority of the population, hence required sustainable policies and programmes aimed at ensuring that the issue of affordable housing no longer becomes a myth, but a possibility.

"There is the need to look at our own circumstances and ask what it takes to achieve housing affordability for those whose means are limited. For example, land can not be acquired from the open market in the main cities of the country, on the traditional 100 ft 80 ft per plot basis for the purpose of affordable housing and hope to result in a degree of affordability.

To achieve the affordable housing that we all crave and further create the needed opportunity for the majority of the country's urban population, the government acting through the ministry of works and housing and other stakeholders have developed a framework to drive a new affordable housing programme", he stated.

This framework, Mr Francis Asenso Boakye hinted, will use an appropriate mix of public and private sector investments that meet the needs and financial capacity of the average Ghanaian.

Accordingly, the ministry has identified each of the components or cost drivers that contribute to the cost of an affordable housing unit and has mapped out specific strategies targeted at each of these components with the sole objective of making housing affordable for the large section of the Ghanaian population.

Through this, the government is committed to reducing up to 40% of the construction cost through the provision of land, infrastructure services and tax incentives and exemptions in support of the affordable housing programme. This, he said, they believe will be pivotal in addressing the supply-side constraints of the housing market.

On the demand side, he explained that the government has planned to scale up the National Housing and Mortgage Fund that was piloted in 2020 to stimulate the demand-side of the housing market and create more access to affordable housing for the low-to-middle income earners.

Adding, that, the government is also considering how prospective homebuyers could use their Tier 2 and 3 pensions fund to support their mortgages, especially the initial deposit.

He seized the opportunity to urge all developers within the real estate sector to embrace the current framework of government and partner with banks and other financial institutions to invest more in the provision of affordable housing where the housing deficit is prevalent.