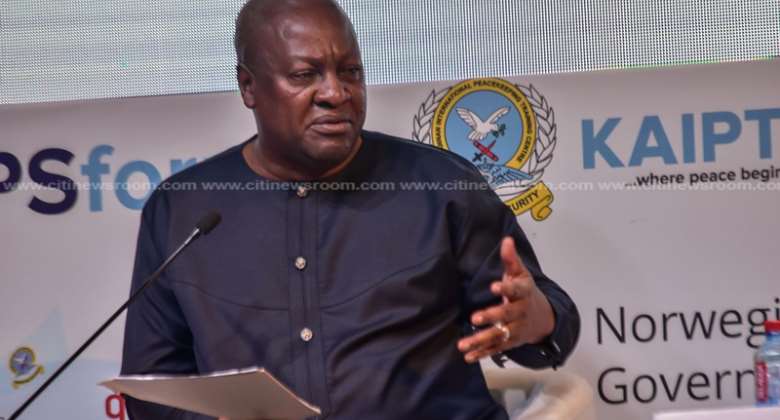 Prophetic utterances had been part of our body politics since 2008 after the late President Prof. Mills visited the late T. B Joshua to enable him to win elections. Since then many so-called minor and major prophets in diverse ways have come up to predict the outcome of our elections. Recently, Nigel Gaisie has added up to the contest and he seems to have fallen in love with Mahama and NDC and is desperate to see him win power at all cost.

Down December 2019, at an all-night event, Nigel Gaisie emphatically prophesied that one “Kwame Mahama” will ascend the throne of the presidency and that God had rejected NPP and Nana Addo. He went further to defend his prophesy until the election outcome proved otherwise. As it stands, Nigel had not given any reason why his emphatic prophesy did not come to pass. Though he claims to have learned his lessons and that he will avoid certain pronouncements henceforth, he is still out there making wild claims out of desperation for a win for Mahama at all cost.

In an interview at the Angel TV Network, Nigel Gaisie has this to say:

"A president in West Africa will resign before his time. It's an Anglophone country. There is a greater agenda to make way for his successor. I don't see Bawumia becoming president in the next 20 or 25 years. I saw him wearing President's Akufo-Addo's shoe so the likelihood is that President Akufo-Addo will resign for him to take over but it will not go beyond 2024. That one is established. I have seen our leadership for the next 25 years and Bawumia is not part of”

"Ghana will have a certain president who should rule for only four years but will stay for eight years. This is what I have seen in the vision”

Clandestinely, Nigel is trying hard to prey on the minds of NPP delegates and party faithful that bringing Bawumia will be a mistake. Because according to his visions, Bawumia is not part of the list of presidents in 25years to come. Again, even if NPP pressure Akuffo Addo to resign to allow Bawumia to replace him, Bawumia will still not win elections. Then he went further and contradicted himself that he does not see Bawumia becoming President in the next 20 or 25 years.

Then, he pulled a controversy and threw in absurdity that a certain president who is supposed to rule for four years will end up ruling for eight years. He claims that is what he saw in a vision. By inference and understanding, Nigel wants us to believe that Mahama will return to power in 2024 and instead of ruling up to 2018, he will be allowed by whichever constitution (may be Biblical constitution) to rule for another four years making eight.

It is clear that Nigel Gaisie had not learned his lessons and continues to tread the path of wild claims on the hind of prophecy in the name of God. What is ridiculous about what he is doing is the fact that he wants to manipulate NPP not to bring Bawumia or make him an option as their leader and let them know that 2024 is not for them according to his visions. Everything Nigel is saying is based on vision and he does not know seeing Mahama go four-eight years instead of four, that if he wins 2024 elections, is tantamount to chaos, conflict and anarchy. Because no law in this country can allow Mahama to rule for eight years unless he decides to manipulate the constitution in his favour and this will make the oppositions and sections of Ghanaians resist even with their blood. In short, Nigel Gaisie is only seeing anarchy after 2028 and nothing less.

I want to sound a caution to Nigel and his unbridled pronouncement in the name of God and visions to be careful because God is not the God of NDC or Mahama or NPP, but a God of justice and fairness. And that whoever presents himself or herself for leadership must ensure that he pleases God and his hands are free from bloodshed. Ghanaians had embraced democracy and God respect that aspect of our lives. Ghanaians will make a decision in 2024 to decide for themselves which leader must lead them, not because of Nigel Gaisie’s vision or prophecies. We are weary of Nigel Gaisie and his so-called theocratic power-drunk style of life. Nobody should be afraid of him because he claims when he prophesies ten at least seven will come to pass. Are Bible prophecies based on chances? Your guess is as good as mine.