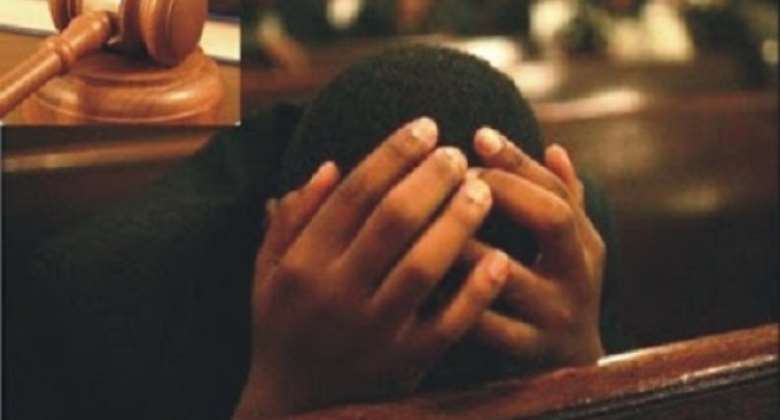 Mawuli, in tears, pleaded with the Court to have mercy on him and that he would never commit the act again.

According to Mawuli, he stole because he had not been paid by his employer and his girlfriend known as Miss Beatrice was two months pregnant. He needed money to take care of her.

Miss Beatrice who hails from Apedwa was in court to plead on behalf of her boyfriend, Mawuli.

Mawuli' girlfriend confirmed to the court that she was two months pregnant and pleaded with the court to have mercy on her boyfriend.

Despite the pleadings by Mawuli and Beatrice, the Court presided over by Mrs Sedinam Awo Balokah handed the three year jail term to serve as deterrent to other workers at the Park.

"Oh Bea, please don't abort the baby, I beg you," was the last plea of Mawuli, this time not to the Judge but to his girlfriend as he was being escorted out of the courtroom to his new abode; prison.

Mawuli had hugged his girlfriend and both shed tears as the Police led him into confinement and life without her warmth.

Habib Dauda, who dishonestly received the stolen iron rods, was however remanded to enable the Court get a Zamarama interpreter for him.

The facts as narrated by Police Chief Inspector Jacob Nyarko are that the complainant Gidoen Egyir is a security man at Oyarifa Park Construction.

Chief Inspector Nyarko said Mawuli was a worker at the Park and he resided at the construction site. Dauda, a scrap dealer, resides at Pantang Focus area.

Prosecution said on October 17, this year, Mawuli stole pieces of iron rods valued GH¢1,300.00 and hid them 600 meters away from the construction site.

According to Prosecution, Mawuli previously met Dauda and he took his phone number so that he could do business with him.

Prosecution said Mawuli called Dauda after he had stolen the iron rods.

Chief Inspector Nyarko said some members of the Oyarifa community spotted Mawuli and they apprehended Mawuli and Dauda.

Prosecution said the two accused persons were handed over to the Police Patrol team at Ayi Mensah together with the iron rods and an amount of GH¢90.00 as exhibits.