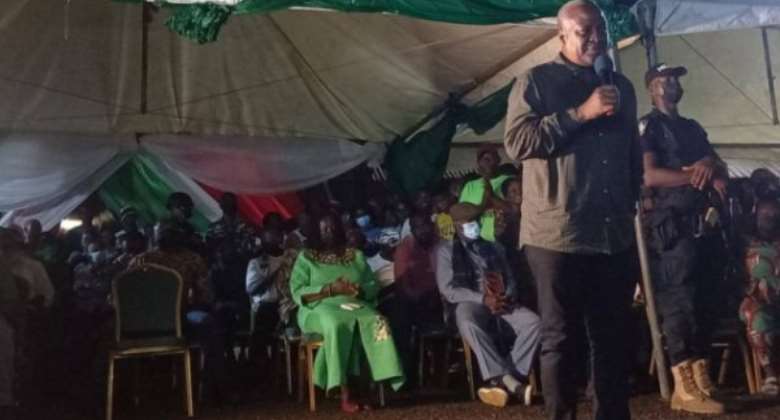 Former President John Dramani Mahama has said the Santrokofi, Akpafu, Lolobi and Likpe (SALL) enclave without a representation in Parliament was one of the greatest travesties of democracy.

He noted that one of the basic tenets of democracy was a slogan that said "no taxation without representation".

The former President noted that law-abiding citizens of a State that paid taxes deserved representation in the Assembly of that State.

Mr Mahama addressing chiefs and people of the Guan District at Likpe Mate during his "Thank you" tour to the Oti Region, said the SALL situation was one that should never happen again.

He said it was the hope that the anomaly was rectified as quickly as possible to enable the people of SALL to have their legitimate representative speaking for them.

Former President Mahama noted that his visit was to congratulate the people of the Area on the creation of the Guan District.

The former President said although the Party supported the election of MMDCEs, it however believed the elections must be based on non-political party lines, adding that the country had become polarised.

Mr Mahama noted that things were tough and people were suffering, adding that the non-performance of the NPP government had revealed his hard work when the NDC was in power.

Mr Samuel Ofosu Ampofo, National Chairman of the Party, noted that the SALL enclave was the only area, which was denied the opportunity to elect a representation in Parliament describing the act as "greatest injustice."

He said the government as a matter of urgency needed to make sure that a Member of Parliament was elected for the people of the Guan Area.

Nana Soglo Alloh IV, Paramount Chief of Likpe Traditional Area, urged the former President to amend Article 243 of the 1992 Constitution to allow the local people to elect their District Chief Executives not on party political lines.

He urged that it should be done before the NDC won political power adding that this would ensure the election of assembly members.

Nana Alloh said the Guan District, which was recently inaugurated needed a Constituency to operate fully since the Common Fund was essential to the development of every Constituency.

Mr John Setor Dumelo, 2020 Ayawaso West Wuogon Parliamentary Candidate on the ticket of the NDC, noted that the people of the Guan District would deliver the parliamentary seat for the Party once they got a Constituency.

He urged Branch Executives to start working hard on achieving the feat.

Mr Mahama, who is touring the Guan District for the first time after its inauguration, is accompanied by Professor Jane Nanaa Opoku Agyeman, Running Mate of the Party, National, Regional and Constituency Executives.

Hottest Photo Reports
Catch up with all the political quotes from our politicians.
Advertise here
More Headlines
ModernGhana Links
Thank you for the wonders of Ghanaian culture, tradition — South Africa's Ramaphosa to Akufo-Addo
Ashantis like NDC; we will target 40% votes in 2024 – Kwabena Duffuor
You told Ghanaians we are not in normal times so why impose elegy? — Group questions Akufo-Addo
PHOTOS: Hundreds of workers stranded at Lapaz as commercial drivers begin strike
Joe Wise rejects Minority’s claims of bias
‘Don’t travel outside this month’ – Nana Addo ban Ministers and deputies who’re MPs
Akufo-Addo to launch 2021 Anti-Corruption Week
Kumasi fast losing its agrarian lands, farmers forced to plant in containers
My people have benefitted tremendously from your policies — Ya Na to Agric Minister
TOP STORIES

Thank you for the wonders of Ghanaian culture, tradition — S...
19 minutes ago