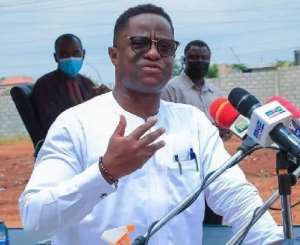 Member of Parliament (MP) of the Hohoe constituency of the Volta Region, John-Peter Amewu has refuted claims by the former flag bearer of the opposition National Democratic Congress (NDC), John Dramani Mahama, that the governing New Patriotic Party (NPP) won the seat through arm twisting tactics.

According to him, the claim of Mr. Mahama and the NDC is evident of the fact that they have lost touch with reality and hence have no idea whatsoever of the level of hard work, unity and sacrifice that went into winning the Hohoe seat from the NDC.

Mr. Amewu who has been described by many as a history maker for his exploits in the Volta Region and Hohoe in particular stressed that Hohoe was not won on a silver platter, but with a unity in purpose and commitment.

The Railway Development Minister made the assertion in Ho during the Volta Regional Annual Delegates Conference last Tuesday, October 19, 2021; a day after the former NDC flag bearer made his claim in Ho.

Since 1992, the NDC has been holding the Hohoe seat until the last election when John Peter Amewu who was then the Energy Minister, won the seat for the NPP for the first time in history.

The historic feat was reached with 26,952 votes in his favour as against 21,821 votes for his major competitor from NDC, Prof. Margaret Kweku. The victory left many in disbelief considering the fact that in 2016, the NDC's Bernice Adiku Heloo secured 35,437 as against the NPP's Marlon Praises Anipa's 6,462.

Despite the over 5000 vote difference and proof of the broken grip of the NDC in Hohoe, Mr. Mahama and the NDC still believes the historic NPP victory was chalked through 'arm twisting'.

“There are 18 constituencies in the region (Volta), you gave us 17 and I know that even Hohoe we would have won but for the arm twisting that took place,” he said on Global FM in Ho last Monday during his 'Thank You' tour.

Responding to the claims of the NDC flag bearer, Mr. Amewu stressed that unity was the secret behind winning the Hohoe seat. “That is how we won Hohoe; we won Hohoe because we were united,” he reiterated.

He added that what was achieved in Hohoe could be achieved in other constituencies in the Volta region because, “The Volta Region presents the growth of the NPP in Ghana.”

Mr. Amewu announced that “Hohoe is not better than Anlo, Ketu South or Ketu North. Former Chairman, Kenwuud is from Ketu North. If Hohoe can do it, then Ketu North Can also do it.”

He added that Hohoe was won because he looked beyond his personal interest and focused on the greater good.

He commended the regional executives, particularly the Chairman, Makafui Woanya for the hard work to increase the party's votes in the 2020 elections, but called for a ten-year strategic plan to annex Volta region from the hands of the NDC.

This he said can be made possible with adequate and consistent support for the Volta region by the National Executives and other well-meaning members and financiers of the NPP.