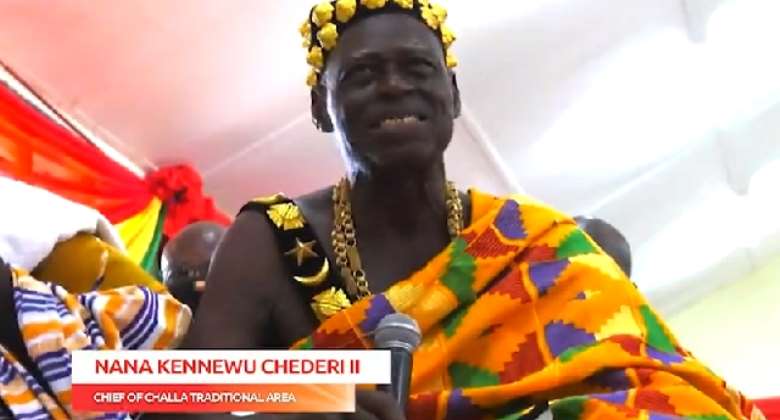 The Chief of the Challa traditional area in the Oti Region, Nana Kennewu Chederi II, has said the 2024 presidential election is done deal for former President John Dramani Mahama.

The chief described Mr Mahama as a God-fearing person who, for the sake of Ghana’s prevailing peace, refused to hold onto power in the 2020 election, although, in his view, the polls were “shamefully stolen”.

For this reason, Nana Kennewu Chederi II said the people of the Oti Region “love and respect you because of your values, your charisma, openness, honesty, tolerance and humility and God-fearing attitude.”

Speaking to Mr Mahama and top officials of the main opposition National Democratic Congress (NDC) when the former President paid a courtesy call on the chiefs and queen mothers of the region, as part of his ‘Thank You’ tour, Nana Kennewu Chederi II said: “Mr Mahama, if you were not to be God-fearing, and had chosen to cling tenaciously to the tenets of power, you would have unexpectedly plunged this dear nation of ours, into an unparalleled state of pandemonium or simply into a state of higgledy-piggledy which would have been too nasty to contemplate when the people’s verdict in the 2020 general election was simply trodden upon and shamefully stolen.”

“Mr Mahama, bear in mind that during your term of office as the president of Ghana, a couple of years back, as the people’s dear president, Ghana was revered as the icon of democracy and the oasis of peace in Africa. Is it so today?” he quizzed.

The chief expressed confidence that Mr Mahama will win the 2024 election “with the unflinching support of the stalwarts of the great NDC and the numerous loyal activists and supporters of the country”.

He further said it was “nonsensical” for critics to have misinterpreted Mr Mahama’s ‘do or die’ statement in relation to the 2024 election as a call for bloodshed.

“When last you made mention of ‘do or die’, your detractors hastily arrived at the conclusion that that was a sanguinary language and that you may turn to be a sanguinary ruler”.

“Please don’t take into consideration that nonsensical remark. When you were the president a short while ago, how many people did you kill?”

“How many soldiers did you send to the polling stations during election time to terrorise and kill? You have the right to express your views,” Nana Kennewu Chederi II stated.

“Your excellency, your stance on LGBTQ+ as well as that of your predecessor is well known and unambiguous, appreciative and admirable because you have taken into consideration, the societal norms of the people you represent – down with Greek aid.”