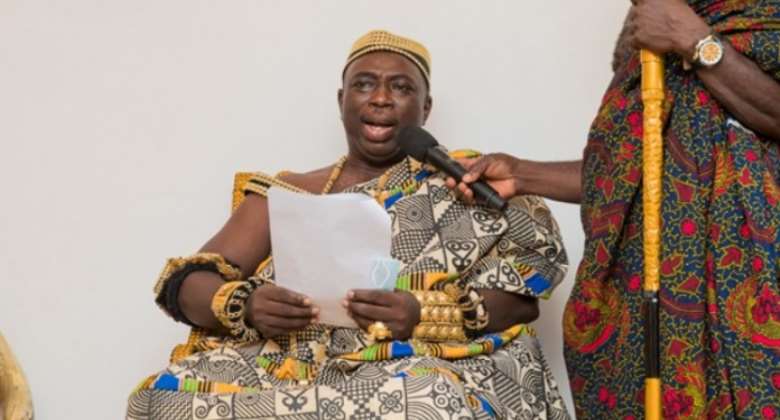 The Paramount Chief of Twifo Hemang Traditional Area, Otumfuo Amoah Sasraku III has heaped praise on President Nana Addo Dankwa Akufo-Addo after describing him as the ‘Moses’ of this generation.

According to him, the President is blessed with the rare gift of visionary leadership in governance and in administration.

Speaking after President Akufo-Addo called on him on Tuesday, October 19, 2021, Otumfuo Amoah Sasraku III said God has ordained the President to lead Ghana to gain economic freedom to become self-reliant.

“We will remain ever grateful to you, our President; and to God for the rare gift of visionary leadership in governance and in administration that he has given you to serve this nation.

“It is without doubt that God has indeed ordained you to lead Ghana onto a path of self-reliance and economic freedom. Clearly, you are the Moses of our time,” the Paramount Chief of Twifo Hemang Traditional Area said.

Otumfuo Amoah Sasraku III in his conversation with H.E Akufo-Addo, said he is impressed that irrespective of the remote nature of communities and its nearly impassable roads, the President is still able to tour the country to touch base with the people and offer solutions to their concerns.

He said for the Free SHS and other policies rolled out by the Akufo-Addo government, Ghanaians will always be grateful to him.

“..even in the absence of the luxury of time to state the life-changing interventions the President has instituted to the benefit of Ghanaians, I cannot be silent about the huge school projects that are dotted all around our communities; many of which are completed, whilst others are at varying stages of completion.

“This exemplifies the President’s renown as an avowed proponent of universal education for our young ones. A lot has already been said about the Free SHS policy and Free School Feeding Programme. It is now a thing of the past to hear people ask for handouts to pay the school fees of their wards. This is a personal testimony and we are. The kids and their parents are therefore grateful,” the Paramount Chief of Twifo Hemang Traditional added.