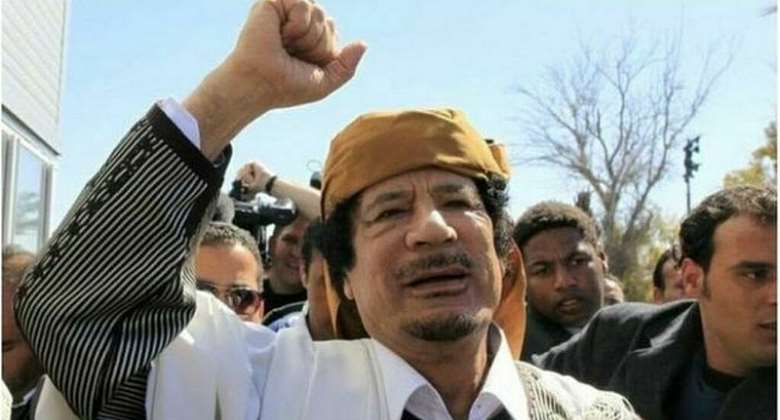 It's been one decade since Libyan dictator Moamer Kadhafi was lynched by an insurgent mob in his home town of Sirte, bringing a violent end to his 42-year-reign of power. RFI looks back at the events of 20 October, 2011, and the country's spiral into chaos in the wake of his demise.

Ten years after Kadhafi was slain by rebels, Libya is still struggling to overcome the violence brought about by his overthrow.

Kadhafi ruled Libya with an iron fist after a coup against the monarchy in 1969, portraying himself as an Arab revolutionary and pan-African hero while mercilessly crushing all opposition.

In 2011, he fled the capital Tripoli during a revolt inspired by the Arab Spring uprisings, backed by Nato.

On 20 October, the rebels tracked him down, tortured him and killed him on the streets of Sirte, displaying his body in a market.

"What was really striking that day was there were Libyans who were happy to see [Kadhafi] captured," recounts Mary Fitzgerald, a scholar with the Washington-based Middle East Institute.

"But there were many others who were dismayed by the circumstances of his killing."

A long-time observer of Libyan politics, Fitzgerald told RFI that people had wanted to see Kadhafi brought justice by the courts.

For many Libyans she spoke to in the aftermath of his death, Kadhafi's mob-style execution "tainted" an uprising that they were very proud of.

The spiral into civil war

Fitzgerald says Wednesday's anniversary is a bittersweet affair that underscores the disappointment followed by the high expectations of life in Libya in the post-Kadhafi era.

His fall failed to bring democracy and stability. Instead, the country has become fractured along regional and ideological lines, with an assortment of mafia-like militia and their foreign backers vying for control of its lucrative oil fields.

Less than three years after Kadhafi was overthrown, Libya was split into two rival administrations and a civil war began.

Yet the uprising and ousting of Kadhafi was backed by the United States, France and Great Britain.

"2014 was the year that Libya tipped into civil conflict," says Fitzgerald. "Initially, there was a sense that Libyans wanted to do this on their own. They insisted that the UN mission to Libya be a very 'light footprint mission'.

"Many Libyans now will say that was a mistake."
For a country emerging from 42 years of "a very idiosyncratic experiment in dictatorship", it was naive to think this wouldn't be difficult.

"I remember in 2011, Libyans telling me 'just wait – within five to 10 years we'll be like a Dubai on the Mediterranean'," Fitzgerald adds. "There was a euphoria; there was a sense that everything was possible."

It soon became clear that short-term moves by the post-revolutionary administration, which barred people who worked under Kadhafi to hold office, "hollowed out the expertise of state institutions".

And when Libya's power vacuum became apparent, the civil conflict brought in foreigners that deepened and exacerbated the conflict, making a peaceful solution between Libyans even more difficult to achieve.

"Since 2014, the external actors that we've seen meddle the most include the United Arab Emirates, Egypt, Russia, Turkey and Qatar," says Fitzgerald.

Following the failure of general-turned-warlord Khalifa Haftar to capture Tripoli from the UN-backed Government of National Unity in 2019/2020, Turkey and Russia emerged as the the key external powers with a presence in Libya.

Since a ceasefire in October last year, followed by the appointment of a unity government with a mandate to lead Libya to elections this December, is the country finally turning the page on a decade of chaos?

That depends whether the elections will actually take place on 24 December, says Fitzgerald.

"You still don't have a proper legal framework that is not contested for these elections. It's becoming clearer that key figures on all sides of the political and conflict divide are not so keen on having elections in December.

"So there are more and more doubts as the days go by."

When it comes to democracy, the European Union has alway prided itself as being the perfect midwife for safeguarding the transition of emerging democracies.

Yet since the end of Kadhafi's regime, European policy towards Libya has been overshadowed by EU demands to contain the influx of African migrants on Libyan soil – a policy that has witnessed horrific accounts of kidnapping, ransom, servitude and slavery.

"The EU has in many respects lost relevance and influence in Libya following the war on Tripoli in 2019 and 2020," Fitzgerald concludes.

"Member states, primarily France, were perceived to be supportive of Hafar. But when Turkey and Russia became the key external players in Libya, the Europeans struggled to see what space they occupy amongst that new dynamic."

– Mary Fitzgerald is a non-resident scholar with the Middle East Institute, Washington based in Marseille.

COVID-19: Government to announce more measures ahead of Chri...
4 minutes ago