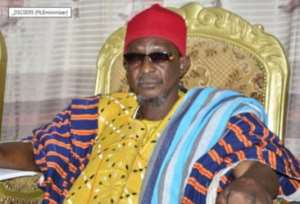 Paramount Chief of the Bongo Traditional Area Naaba Salifu Atamale Lemyaarum, has described the growing habit of alcohol and drugs abuse by the youth in the Bongo District of the Upper East Region as "very pathetic and disaster" for the community.

He blames the District Assembly for not supporting his earlier initiative to clamp it down on persons found engaging in the act.

In 2020, out of 769 mental health cases recorded, 47 of them were attributed to alcohol and 36 to psychoactive substance use.

The Paramount Chief in an Exclusive interview with this reporter said, he has observed that the youth who are supposed to take over from them in terms of leadership have gone wayward.

“I have been looking at the whole thing, I don’t just know what to do. Because, a lot of the youth have gone wayward and it is very pathetic because if you have a community and the youth are wayward then, which means we are leading to disaster. We are expecting that they will be the future leaders, we want them to take over from us. So, if they are not able to take over from us, then the community is just heading towards disaster,” he said.

Meanwhile, when this reporter asked what the chief think could be the solution to the trending canker, Baba Lemyaarum said, "the remedy for it, is a collective effort."

He stressed that he alone cannot bring an end to the worrying situation. “Looking at it, the remedy for it, is a collective effort, because me alone I don’t know what to say. Now, there is a high rate of the intake of drugs and now you can’t even talk because we are even advocating it on the media. A TV is always talking about legalizing marijuana and the youth are always watching TV, are we not promoting it? So, how do we clamp it down? Now the alcohol is a different issue but apart from the alcohol, they take this tramadol.

"Why should the government even allow this tramadol to even exist within our market, when we know is a dangerous drug? If you want to talk about the need for security to clamp down wee smokers, the security themselves smoke it. So, that is a big problem, all that we need is to do education, we need to sensitize, those who will take they will take, those who won’t take can go. Because at the end of the day, we may be able to save some souls,” he laments.

However, responding to a suggestion by one of the Bongo District Assembly Members, Nyaaba Mbabila Joseph believes enacting a bye-law to ban minors from going to drinking spots will curb the growing canker.

The Paramount chief indicated that such a suggestion is good but will infringe on their rights. He blamed the Assembly for not showing any support when he approached it with his personal initiative on how the problem can be tackled.

“If they cannot pass a bye-law to stop playing electronic jams at funeral grounds, I took the initiative to stop the intake of some of these hard drugs among youth. I followed but the Assembly didn’t help me on that and they couldn’t support me. I wanted them to pass a bye-law and they couldn’t. How can you pass a bye-law stopping minors from entering drinking bars? Are you not infringing on their human rights,” he quizzes.