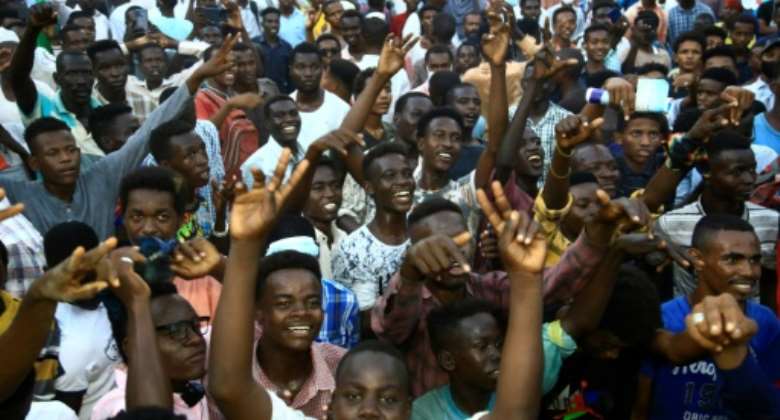 On October 18, 2021, Sudanese protesters demonstrate in the capital Khartoum demanding the dissolution of the transitional government. Tuesday marked the fourth day of protests. By ASHRAF SHAZLY (AFP)

Hundreds of pro-military protesters on Tuesday joined a sit-in demonstration in the Sudanese capital demanding the dissolution of the country's embattled transitional government.

Trucks loaded with people arrived outside the presidential palace in central Khartoum where the protesters have been camped out since Saturday, an AFP correspondent said.

The demonstrations were called by a breakaway faction of the Forces for Freedom and Change (FFC), an umbrella civilian alliance which spearheaded protests leading to the fall of autocrat Omar al-Bashir more than two years ago.

They have highlighted the deep political divisions among factions leading Sudan's fragile transitional since Bashir's ouster.

"We came as part of a delegation to rectify the course of the revolution," said Ismail Mohamed Awad, one of the demonstrators.

"We are demanding a competent, non-partisan government," added the 35-year-old.

Another protester, Hisham Awad al-Nimr, said he would not leave the sit-in until the leader of Sudan's ruling body, General Abdel Fattah al-Burhan, "dissolves the government".

Protester Altoom Ibrahim Ahmed, from the country's west, said the sit-in was a way to give the military a "mandate".

"We want a military council, no civilians or anything else," he said. "We have been here for four days and we will stay put for another month if we have to."

Sudan has been led by a civilian-majority ruling council, chaired by Burhan, since an August 2019 power-sharing deal.

Support for the government of UN-economist-turned Prime Minister Abdalla Hamdok has waned in large part over a tough raft of economic reforms.

Demonstrators chanted slogans including, "Freedom, peace and justice" and "Civilian is the people's choice".

Meanwhile, the splinter faction of the FFC urged its supporters to hold their ground and to also gather in large numbers on the same day.

The official news agency SUNA reported Tuesday that Burhan expressed commitment to the transition to civilian rule in a meeting with the British ambassador to Sudan.