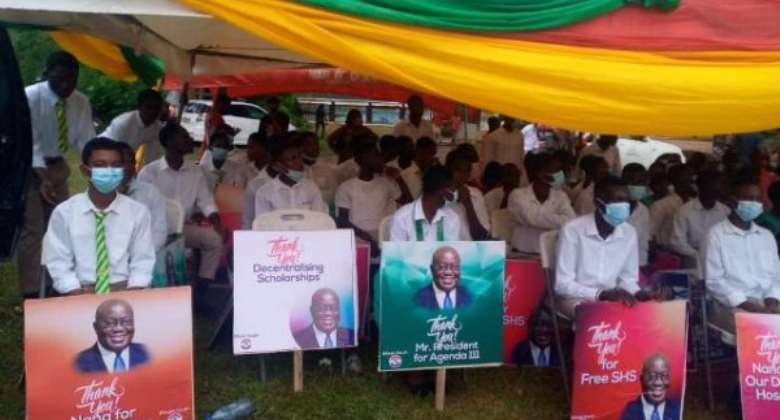 He said it was unfortunate that former President John Dramani Mahama, under whose leadership the country was plunged into serious economic abyss, would have the effrontery and impudence to accuse his government as such.

The President was speaking to the media in Cape Coast and at separate durbars as part of his two-day working tour of the Central Region on Monday.

Former President Mahama recently took a swipe at President Akufo-Addo for what he described as his incompetent management of the economy.

Mr Mahama had said the government was hiding behind the COVID-19 pandemic as a convenient excuse for the NPP government's mismanagement of the economy.

But, according to the President, Government was on course to deliver on the promises it made in the lead up to the 2016 and 2020 elections to fundamentally reform Ghana and improve the lives of its citizens.

The President said information on the grounds, indicate of his high performance on delivering his promises, including the Free SHS policy, which had been fulfilled with impactful testimonies.

"We pledged to build a society anchored on fairness, decency and integrity. We committed ourselves to serving our countrymen and women with dedication and honesty.

“The Government of President Nana Addo Dankwa Akufo-Addo is absolutely on course. We are systematically working to deliver on each of our promises," President Akufo-Addo noted.

According to President Akufo-Addo, economic growth rate of the country in 2016, stood at 3.4 percent under the tenure of office of Mr Mahama, the lowest in two decades with all other macroeconomic indicators pointing in the wrong direction.

“Inflation, when he left office, was 15.4 percent while interest rates which are always a good determinant of how the economy is operating was 32 in December 2016, but currently 20.6 percent.

He stressed that prior to COVID-19, Ghana was one of the fastest growing economies in the world with a GDP of seven percent and wondered how this could be considered “economic mismanagement".

The President wondered what would be the description of the economy managed by Mr Mahama, which took Ghana into the embrace of the International Monetary Fund (IMF).

Nonetheless, President Akufo-Addo also called on Ghanaians to retain and support the next NPP led-government after 2024 polls to sustain the giant economic gains made so far.

"The NPP has chalked remarkable successes by turning the fortunes of the country around, yet it remained committed to sustaining the gains while building a resilient and robust economy for the general well-being of all citizens".

"I will hand over government to the next government in peace as stipulated in the Constitution of Ghana but hopefully, to an NPP led government," the President said.

Hottest Photo Reports
Catch up with all the political quotes from our politicians.
Advertise here
More Headlines
ModernGhana Links
Anas wins ‘Foreign Journalist of The Year award’ in US
It's a ‘shameful’, ‘despicable’ act– Police arrests sex predator cop seen harassing woman in car
IGP cause arrest of police officer for allegedly harassing female victim
We say no to Bagbin's political charlatanism, partisan chicanery, parliamentary terrorism — Fixing The Country Ghana on 2022 budget rejection
Even if e-levy is reduced to 0.001% it would be rejected – ASEPA
Mahama hands over renovated boys dormitory block to Ghanasco
Majority MPs can't just get up and shout me out of Parliament, they have no right – Asiedu Nketiah
137 MPs can’t reject budget, 2022 Budget still stands — Majority fight back
Rejection of 2022 budget is victory for Ghana – Sam George
TOP STORIES