Chief appeals to Akufo-Addo to beef up security in Area 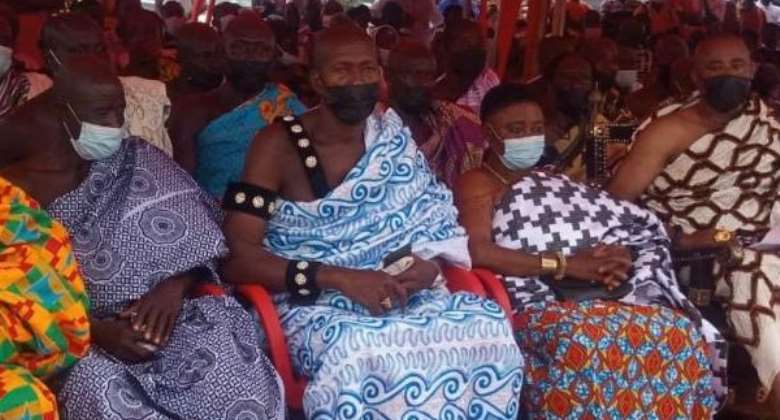 Nana Oduro Asene Bisayiadom II, the Chief of Assin Bereku, has appealed to President Akufo-Addo to beef up security in the district.

Making the call when President Akufo-Addo paid a working visit to the people of Assin Bereku on Monday he said the place was hit by some alleged ritual killings and riots among the youth, leading to insecurity, making living a nightmare in the area.

In view of this, he said there was increase in crime related activities and the inadequate police personnel and the state of the Police Station in the community was worrying to the Traditional Council.

Nana Bisayiadom, therefore appealed to the President to build a state-of-the-art Police Station in the community to deal with emerging crime in the Area.

On the one-district-one factory (1D1F), the Chief appealed for a factory to be built in the community to create jobs for indigenes to reduce the rate of unemployment among the youth.

The Chief thanked President Akufo-Addo for the numerous interventions during the COVID-19 Pandemic, as well as the introduction of the free Senior High School (SHS) Policy and the re-appointment of Charles Ohene Andoh, as the District Chief Executive.

On his part, President Akufo-Addo thanked the people of Assinman for voting for New Patriotic Party (NPP) to lead the people of Ghana and promised to table their plea to the appropriate quarters for redress.