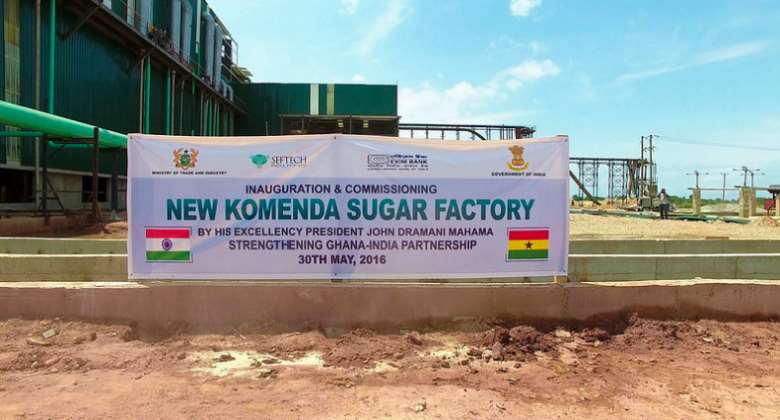 A former member and secretary to the Komeda Sugar Project Management Board, Ransford Vanni-Amoah has accused the Akufo-Addo's government of deliberately failing to operationalize the Komenda Sugar factory set up by former President, John Mahama.

For him, the government simply does not have the political will to see the factory running for socio-economic development.

His comments come on the heels of President Akufo-Addo’s ridicule of John Mahama on the state of the factory.

“This is the plan, but this government lacks information, they should rather get in touch with the predecessors for the roadmap to this factory, or they will make mistakes. I think making the factory dormant is a deliberate attempt by this government not to operationalize the company. Because I don’t get the understanding of this government.

“With the five years that the factory has been abandoned, the equipment and machinery are deteriorating because nothing is being done. This government does not have the political will to operationalize the factory because it is not part of their agenda”, he said on Eyewitness News.

It will be recalled that during an interview on Cape FM, former President Mahama stated that “I'm not that foolish to set up a factory and have no plan for the provision of raw materials. I knew what the vision was. It was to get the raw materials first”.

In a sharp rebuttal, Nana Akufo-Addo during his tour of the Central Region said, the decision taken by his predecessor, to build the Komenda Sugar factory, without first establishing a sugarcane plantation, betrays every principle of construction .

He said the NDC had a blueprint to make the facility operational and thus cannot fathom why the current administration does not want to implement it.

“We bequeathed to them, a working factory, and we secured a loan which was supposed to be accessed in February. At the time, we weren’t in government. They were in government. The Minister of Trade had admitted that the funds were available, and they were in the process of accessing them. So five years down the line, why have they not been accessed to operate the factory if they are willing to do so”, he stressed.

Advancing his argument, Mr. Vanni-Amoah stated that, the posture of the NPP is indicative that it is not prepared to make the Komenda sugar factory functional.

He was, however, quick to advise the NPP to engage the NDC on plans to make the sugar factory operational going forward.

“I have listened to President Akufo-Addo talking about this, and it’s like he is not top on issues. The plan was that the factory was to use backward integration. Now, we must let the people understand the factory is there. All they have to do is to cultivate more sugarcane to feed the factory.