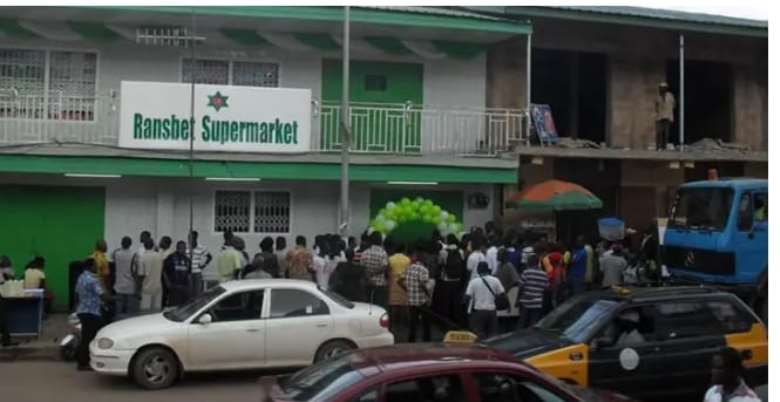 The scene in front of the supermarket after the robbery incident

Suspected armed robbers yesterday entered a popular supermarket in the mining town of Tarkwa in the Western Region and made away with huge sums of money at about 10 am.

According to sources, the robbers were spotted in the vicinity of Ransbet Supermarket around 9 am prior to the 'operation', which happened in the full glare of the residents.

DAILY GUIDE learnt that there was a bullion van in front of the supermarket to collect the sales for the weekend, when the hoodlums pounced on the supermarket.

“We saw some officials of the bank parked the van at the parking space of the supermarket and went inside. As they were returning with the money, three persons, including a lady, suspected to be armed robbers arrived on a motorbike unmasked with a gun,” an eyewitness narrated.

He said the suspected armed robbers started firing warning shots to scare the people around and moved straight to a staff of the bank who was holding the money.

In the process, the robbers shot into the bullion van and forcefully took the money from the bank staff and fled on the motorbike again.

The driver of the bullion van tried to chase the armed robbers but due to the crowded nature and traffic in the area, the motor escaped without a trace.

Onlookers who were at the scene became worried about how the armed robbers were able to know that monies will be transported from the supermarket at that particular point in time.

Another resident also narrated that there were two armed men on two separate motorbikes who went to the supermarket which is closer to the Tarkwa branch of Melcom Supermarket.

He said that one of them pulled a gun and fired a warning shot to scare the people around before taking away the money from the staff of the bank.

Another eyewitness who gave his name as Stephen Amoah told Takoradi-based Skyy Power FM that the bullion van of the bank came without a police escort.

“Probably, they thought it was safer to transport the cash in the early morning. The police must be swift in investigating both workers of the supermarket and the bank because what happened beats everyone's imagination,” he said.

He told listeners that some persons who were at the scene believed that an insider must be working with the armed robbers and that could have triggered the attack.

“Ransbet is a popular supermarket in Tarkwa and looking at the time and the circumstances surrounding the whole incident, an insider may have collaborated with the robbers,” he asserted.

Meanwhile, the Tarkwa Divisional Police Command have started their investigations into the incident and have promised to arrest the perpetrators.