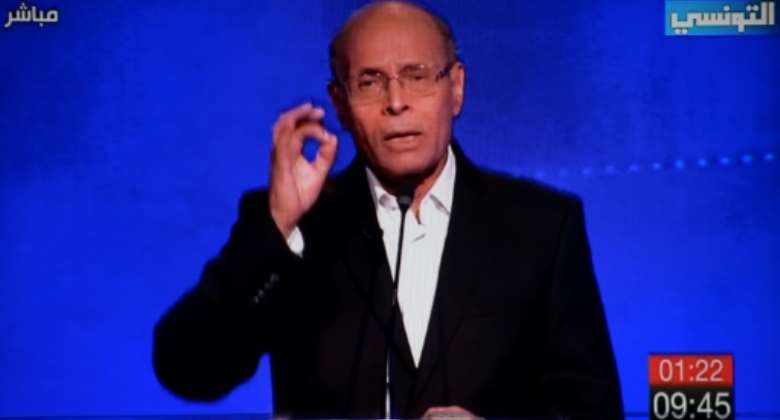 Paris-based former Tunisian president Moncef Marzouki has emerged as a vocal critic of incumbent Kais Saied's power grab, but analysts say he may lack the popularity to lead the opposition.

Saied on July 25 sacked the government, suspended the legislature and seized control of the judiciary, later moving to rule by decree in the North African nation.

Marzouki has used appearances on pan-Arab news channel Al-Jazeera to call his opponent a "dictator", accusing him of carrying out a coup.

His hard line marks him out from the country's main political parties. Even Islamist-influenced Ennahdha, seen as a key target of Saied's moves, has called for "peaceful resistance" and dialogue.

The 76-year-old Marzouki, who has a reputation as a champion of democracy, was a prominent critic of dictator Zine El Abidine Ben Ali and became Tunisia's first president after the autocrat's fall in a 2011 revolution.

Tunisians raise national flags during a rally against the president along the Habib Bourguiba avenue in the capital Tunis, on October 10. By FETHI BELAID (AFP)

But he was later criticised for his alliance with Ennahdha, and his poor showing in a 2019 presidential election left his career in tatters. Saied won the poll in a landslide.

Today, unlike Ennahdha and other political parties, "he has nothing to lose", said analyst Slaheddine Jourchi.

"Marzouki's ambition is to be the most prominent voice in the opposition," Jourchi said. "The current situation allows him to make a return to political life."

A picture provided by the Tunisian Presidency on October 14, 2021 shows President Kais Saied chairing the first meeting of a new cabinet in Tunis following his July power grab. By - (TUNISIAN PRESIDENCY/AFP/File)

The former president urged France not to support Saied's "coup against the revolution" and to "respect Tunisia's national sovereignty".

Saied in turn accused Marzouki of "plotting against the state", ordered his diplomatic passport withdrawn and urged the justice ministry to investigate him.

Marzouki swiftly responded by saying he was "not concerned by any decision issued by these illegitimate authorities".

Marzouki shown in August 2019 when he submitted his candidacy for early presidential elections. By HASNA (AFP/File)

In a Facebook post, he slammed "a nascent dictatorship in which the dictator is confused with the nation, recalling the Ben Ali regime, under which opposing the dictator was considered treason."

He also accused Saied of importing the "Egyptian model" of President Abdel Fattah al-Sisi, who took power in 2013 after leading the military's ouster of Islamist Mohamed Morsi.

Marzouki and Saied are both academics. The former studied medicine and has a broad knowledge of human rights issues, while the latter has a background in constitutional law.

Both have a flair for speeches in elegant formal Arabic, although Saied's discourse is markedly more populist than that of his rival.

Marzouki, who was brought to power by a 2011 parliament dominated by Ennahdha, has sought to distance himself from the party, piling some of the blame for the country's political crisis on its chief, parliament speaker Rached Ghannouchi.

He has urged both Ghannouchi and Saied to quit, warning that otherwise "they will drag Tunisia towards ruin".

Tunisians face riot police during a rally against President Kais Saied in Tunis on October 10, 2021. More than 5,000 people, according to observers, flocked to the downtown Avenue Bourguiba. By FETHI BELAID (AFP/File)

Political analyst Abdullatif Hannachi said Marzouki, a former president with a large network of contacts and "a history of campaigning for human rights", has some leverage.

"I don't think he can be a symbol of the opposition," he said. "He's playing the role Ennahdha should be playing" as the biggest party in parliament.