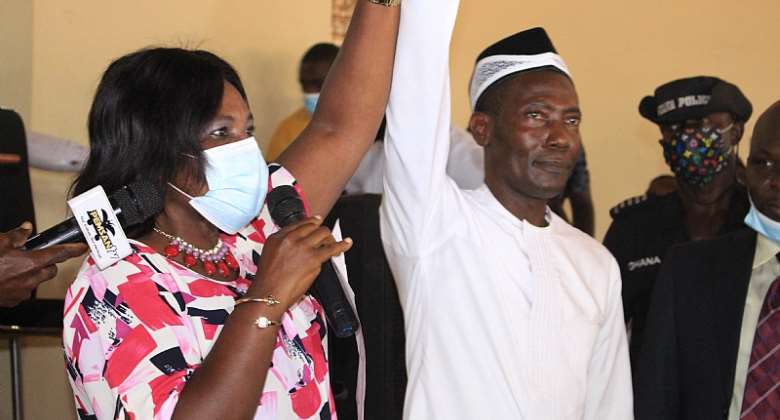 There were wild jubilations among residents and party faithfuls at Adansi Akrofuom after Assembly members of the District overwhelmingly endorsed the President's nominee for the District Chief Executive of Adansi Akrofuom, Honorable Maurice Jonas Woode.

He secured 100% of the votes cast with all 17 Assembly members voting for him. The elections were supervised by the Deputy Ashanti Regional Director of the Electoral Commission Diana Osei Assibey Frimpong.

Clad in white apparel and Npp party T-shirts, residents thronged the major streets of Akrofuom with drumming and dancing to celebrate Hon. Maurice Woode's endorsement as the DCE of the area.

It would be recalled that the President, His Excellency Nana Addo Dankwa Akufo-Addo earlier, nominated Richard Owusu who was the Constituency Treasurer, as the District Chief Executive for Adansi Akrofuom. However, he failed to secure the needed votes to be confirmed DCE in an election held on Friday, 1st October, 2021. Richard Owusu could only secure 5 out of the 17 votes cast on the day. This represented only 29%.

According to the Electoral Officer of the District, since Richard Owusu could not obtain 50% plus votes, Assembly members would reconvene within 10 working days for another election.

To the surprise of many, Honorable Maurice Jonas Woode who was the District Chief Executive was reappointed by the President in a letter dated 12th October, 2021 and signed by the Ashanti Regional Minister, Honorable Simon Osei Mensah.

Before the elections, there were good will messages from Honorable Alexander Frimpong, Municipal Chief Executive for Asante Akyem South and the Dean of MMDCEs in Ashanti Region as well as Nana Sarfo Agyeman, the representative of the Adansihene. They all prayed the Assembly members to overwhelmingly endorse the DCE for the area for a second term.

After his massive endorsement by the Assembly members, Honorable Woode, who could not hide his joy thanked the President of the Republic of Ghana, His Excellency Nana Addo Dankwa Akufo-Addo for the confidence reposed in him.

"History has been made in the Ashanti Region today, my come back is really unprecedented here, I thank you, Mr. President," he stated.

He also thanked the Assembly members for their unflinching support as evidenced in the astounding endorsement for his second term. He told Assembly members that, they have to work hard in unity, to justify his re-appointment or re-nomination.

Hon Woode also appealed to all stakeholders in the District to rally behind him to steer the affairs of the District. He added, " I cannot do this alone. All hands must be on deck as we all work hard to bring development to the people of Akrofuom."

THE DEVELOPMENT OF AKROFUOM IS ON COURSE

Honorable Maurice Jonas Woode, popularly known as ' The Commissioner General' said events surrounding his re-nomination has challenged him to do more for the District. He noted that he will not rest on his oars to bring development to the people to justify the confidence reposed in him by the President.

"Currently, contract has been awarded for road contractors to undertake Asphalt Overlay on the Amansan area through to Odumase to Dampayaw road. Again, the Dampayaw road through to Sikaman to Kojo Nkwanta road will receive massive facelift," he intimated.

HON. MAURICE WOODE OR NOBODY ELSE

The Presiding Member for the Akrofuom District, Honorable Peter Amponsah told SMS Media that they did not endorse the President's initial nominee because he was not their choice. "We felt that Honorable Maurice Jonas Woode was not treated fairly after his good works so we deliberately voted against Richard Owusu," he stressed.

He said he rallied all the Assembly members together to vote massively for Honorable Woode after the President renominated him.

He appealed to the DCE to continue the good works he has done for the District and promised to support him.