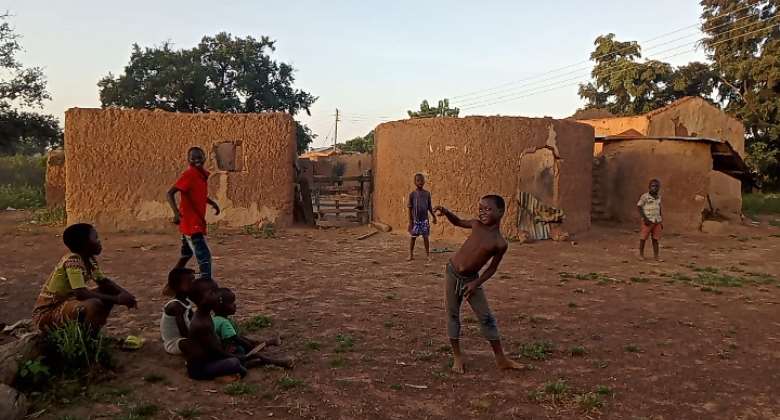 The living condition of some residents of Yong-Dakpemyili, especially their place of abode have become a serious challenge after a chieftaincy clash that occurred in the area couple of months ago.

There has been resistance between two brothers over who is the legitimate chief for the Yong-Dakpemyili Community, a suburb of Tamale in the Northern Region. In February 2021, gun battle and confrontation between supporters of the two factions led to houses numbering about twenty (20) bring torched in the community, bags of foodstuff got burnt as well.

Residents whose homes were destroyed and burnt fleed to adjoining communities for safety and accommodation. Some of the affected residents have however begun to return to the community to start life all over again.

The community at the time of the visit was calm, few residents were seen going about their activities with few children playing in the neighbourhood.

A returnee, Abdul Fatawu Bagaham whose compound house with 23 rooms got burnt now seek refuge in a mosque cubicle with his entire household.

During a follow-up to the community by ModernGhana News to uncertain the state of the affected victims, the returnee, Abdul-Fatawu Bagaham, his two wives and 18 children were seen occupying portion (Mankarata) of a Mosque that has been reserved for children to study Arabic as their temporary apartment.

Abdul-Fatawu Bagaham told this reporter that he escaped an attack during the chieftaincy confrontation, but his entire residence including other homes numbering about 20 were raised down by unidentified persons.

He bemoaned his current condition, noting that staying in a building reserve for children to study Arabic is disturbing, inhuman and frustrating.

"As a landlord who has two wives, 18 children in this kind of situation is really difficult and worrying. My entire building was burnt into ashes during the dispute. Staying in this building with my family is not the best at all. The sad thing is that we were not part of the violence but some people took advantage of the incident to execute their agenda against me," he stated melancholically.

According to him, he has been able to construct a foundation for a new building close to the mosque, but he has run out of funds and therefore appealed to government, philanthropists and NGOs to come to their aid.

He charged the security agencies to speed up the investigation and bring the perpetrators of the crime to book.

He revealed that none of the affected victims in the community had receive assistance or any kind of support from the state agencies.

The daughter of the returnee, Khadija Abdul-Fatawu says life has not been easy since the incident happened, adding that her father had to cough out money to buy new books and school uniforms for her. According to her, the incident had affected her studies a lot.

Also, another victim, Mba Afa whose house was attacked and burnt used the opportunity to call on corporate bodies and the state authority for support. He said his wife and children have relocated to a nearby community due to accommodation challenges making his life miserable.

"I have lose everything, my house, my family are all gone, I don't have anything with me, feeding has become problem including where to sleep, sometimes I beg for food in peoples home, my self and all those who have been hit by these incident need support from NGOs and government," he lamened.

Latest Photo Reports
Catch up with all the political quotes from our politicians.
Advertise here
More Social News
ModernGhana Links
Rise to resist oppressive E-Levy just as is stated in the national anthem — CFELAG to Ghanaians
Slow pace of work at the Essipon Sports Stadium worrying – Residents
Mob attacks police for preventing lynching of murder suspect at Wassa Pewuako
National Peace Council calls for truce over 2022 budget brouhaha
Security guard killed at Chorkor
You can be dragged to court for makking too much noise during sex — Lawyer
Group to protest GHS509 deduction from teachers’ allowance for laptops
Covid-19: Health workers are tired, get vaccinated to protect yourselves – Dr. Nsia Asare
GNAT, NAGRAT and CCT behind one-teacher, one-laptop initiative – NAPO
TOP STORIES

Thank you for the wonders of Ghanaian culture, tradition — S...
15 minutes ago