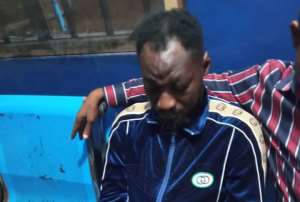 The Ghana Police Service (GPS) has announced that it has arrested popular actor Funny Face after threatening to kill the mother of his kids.

Born Benson Nana Yaw Oduro Boateng has been in the news after he reined insults and threatening to kill the mother of his children, Vanessa Nicole, for using the children as an excuse to extort money from him.

In the video that went viral, Funny Face said if he manages to kill the woman, he would also commit suicide.

The Police following up on the said viral video has taken proactive measure to arrest Funny Face.

“The Police have today, Monday, 18th October, 2021, at 10:14 pm arrested Benson Nana Yaw Oduro Boateng, popularly known as Funny Face for allegedly threatening certain individuals via some Social Media platforms,” a statement from the Police on its Facebook page has said.

According to the Ghana Police Service, it shall submit Funny Face to the court for an order for psychiatric examination, to determine the next line of investigative action due to his history.

Find more in the attachment below: